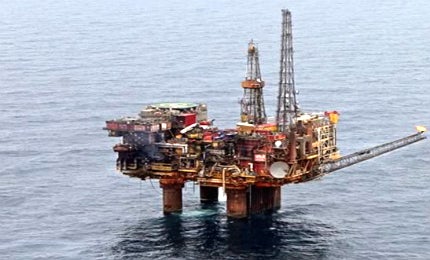 In a press statement, Shell said it will suspend drilling in Alaska’s Beaufort and Chukchi Seas to arrange its equipment, with plans to resume activity at a later stage.

Later in the month, the company was told by a US Government agency they would not be able to re-enter the Arctic without overhauling its plans, as the organisation had entered the Arctic without finalising key components of its programme.

On the 2nd of March a hydrocarbon leak recorded at the TAQA Bratani operated Cormorant Alpha platform in the North Sea, and subsequent closure of a Brent crude-oil pipeline system for maintenance, brought the UK natural gas industry to a halt.

The closure had several knock-on effects, as twenty-seven fields flow through the platform. TAQA indentified the leak in one of the platform legs, the second leak in 2013, on a Saturday morning during maintenance work and shut the platform and the Brent pipeline system as a precautionary measure.

Four days later, TAQA announced it had started the process of restoring the flow of an estimated 80,000 barrels per day (bpd) of crude oil in the Brent pipeline system following the precautionary shutdown.

In the second week of a civil court trial to determine blame for the Deepwater Horizon disaster, Transocean‘s senior toolpusher Randy Ezell testified to BP‘s negligence.

According to 57-year old Ezell, on the night of 20 April 2010, while relaxing in his room after a day’s work, a loud explosion knocked him to the floor, left him buried in debris and killed 11 fellow workers.

He also testified that Jason Anderson, who was one of the 11 workers killed on the rig, was a "top-notch" toolpusher, who would have done everything in his control to avert the blowout, reported the Huffington Post. Ezell noted that Anderson and other BP supervisors had misinterpreted the results of a crucial safety test.

The Health and Safety Executive (HSE) in the UK gave its clearance to France-based major oil group Total to restart its Elgin gas field in the North Sea, which was closed in March 2012 following a major gas leak.

The HSE accepted the revised safety case, which was submitted by Total, and has allowed the oil company to restart production at one of the world’s deepest and most highly pressurised wells.

In a press statement, HSE said: "The company undertook to demonstrate that it had re-evaluated the risks associated with operating the installation by resubmitting the safety case required by HSE to permit production."

BP, in its latest annual report released last month, said it anticipates it will have to pay more than it previously estimated for compensation for private financial and property damage in relation to the Deepwater Horizon crisis in the Gulf of Mexico.

The company said that average payments for business economic losses until now have been much higher than estimated earlier, and significantly more than $7.7bn.

BP chief executive Bob Dudley said the company has so far spent about $24bn as part of the cleanup and restoration costs and payments in relation to claims made by individuals, businesses and governments relating to the disaster.

Scotland will witness a renewed oil boom in the next few decades and confirm its position as a major oil-producing nation and European energy powerhouse, according to a report published by the country’s government last month.

The Oil and Gas Analytical Bulletin said the nation’s oil and gas industry is expected to generate between £41bn and £57bn in tax revenues between 2012-13 and 2017-18.

The industry, including both onshore and offshore, is expected to contribute nearly £25bn to Scottish gross domestic product (GDP), which is about 17% of the total in 2011, while the North Sea oil and gas sector boosted the UK balance with payments of £40bn in the same year.

The company said the gas was extracted from deposits of methane hydrate, which is a frozen gas, also known as "flammable ice", near the country’s central coast.

The trade ministry of Japan announced that production tests will be carried out for up to two weeks, which will be followed by tests on how much gas has been produced, Reuters reported.

Sale of additional leases in Gulf of Mexico draws $1.2bn in bids for US

The US Government’s sale of a nine million-acre of oil and gas leases in the central Gulf of Mexico attracted $1.2bn in high bids for tracts on the US Outer Continental Shelf offshore of Louisiana, Mississippi and Alabama.

On the 19th of March, as part of the ongoing Deepwater Horizon negligence trial, Transocean CEO Steven Newman testified before a federal judge that the company’s crew made mistakes on the day its rig blew out on BP’s Macondo well in 2010.

Newman, however, made it clear that Transocean was not in charge of overall safety on the rig, owned by his company.

Newman said while being questioned by a Transocean lawyer: "We acknowledge that we should have done more."

BP and Transocean faced US prosecutors in court who alleged the companies’ negligence contributed to the 2010 Deepwater Horizon explosion, the UK North Sea hit a 30 year investment high, while Rosneft and ExxonMobil decided to expand their Russian Arctic shelf joint venture.

The running aground of a Shell drill ship in the Arctic provoked a US investigation and 27 UK oil ships were forced to close after a leak.