With $422.3bn market value, ExxonMobil is not only the world’s biggest oil and gas company but also the world’s biggest seller of petroleum products. It produced 2.1 million barrels of oil per day and 11.1 billion cubic feet of natural gas per day in 2014.

Headquartered in Irving, US, ExxonMobil has global presence in 47 countries. Its proven reserves were estimated to be 25.2 billion oil-equivalent barrels as of December 2013. It completed eight major upstream projects in 2014.

Chevron Corporation, one of the world’s biggest integrated energy companies, operates in some of the world’s major oil and gas regions. It produced 5,167mmcf/d of natural gas and 2,571mb/d of total net oil equivalent in 2014, complemented by first production at the North Rankin 2 Project in Australia, the Papa-Terra Project in Brazil and the Tahiti 2 Project in the U.S. Gulf of Mexico.

Chevron’s major activities in 2014 included two natural gas discoveries in the Carnarvon Basin offshore Western Australia and crude oil discovery at the Coronado prospect in the deepwater Gulf of Mexico. The company reported earnings of $19.2bn for the year ended December 2014, while revenue stood at $211.9bn.

PetroChina, a subsidiary of China National Petroleum Corporation (CNPC), produces two-thirds of China’s oil and gas, making it the biggest oil and gas producer in China.

The company’s domestic exploration is centred in oil and gas regions such as Songliao Basin, Erdos Basin, Tarim Basin, Sichuan Basin and Bohai Bay Basin, and the output comes from oil and gas fields in Daqing, Changqing, Xinjiang, Tarim and the south-western region. Its overseas oil and gas operations are spread across Central Asia, the Middle East, America, Africa and Asia Pacific.

Total, an integrated oil and gas operator engaged in the exploration, production, processing and transportation of oil and gas resources, produced 1.03 million barrels of oil equivalent per day and 6,063 million cubic feet per day gas in 2014.

Headquartered in London, BP has presence in 80 countries and upstream operations in 28 of these. BP is the biggest foreign player in the Russian oil market, and is also one of the biggest producers of natural gas in North America. It either wholly or partly owns 14 refineries across the world.

China Petroleum & Chemical Corporation (Sinopec Corp.), the second biggest producer of crude oil and natural gas in China, had proven developed and undeveloped reserves of 2,841 million barrels of oil and 6,493 billion cubic feet of natural gas as of December 2013.

The company has 12 oil and gas subsidiaries and is associated with oil and gas exploration and development zones in the east, west and south regions of China.

Eni, the world’s eighth biggest oil and gas operator by market value, produced 1.6 million barrels oil equivalent per day and reported $126.3bn of revenue and $1.5bn of net profit in 2014.

About 89% of the Eni’s output was from outside Italy, primarily from the US, UK, Angola and Algeria. The company’s estimated net proven reserves as of December 2014 stood at 6.60 billion barrels of oil equivalent.

Norwegian global energy company Statoil has business operations in 36 countries and upstream operations in 29 locations worldwide. It produced 1,927mboe per day and had proven oil and gas reserves of 5,359mmboe in 2014.

Statoil operates Oseberg, one of the world’s biggest oil fields, and fields including Alve, Asgard, Borg, Heidrun, Kristine, Norne, Njord, Sleipner East and West, Skuld and Vega on the Norwegian continental shelf. Its major oil and gas discoveries in 2014 were in the Drivis prospect in the Barents Sea, and Askja prospects in the Grane area offshore Tanzania. 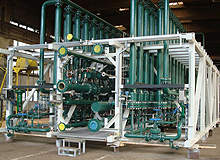