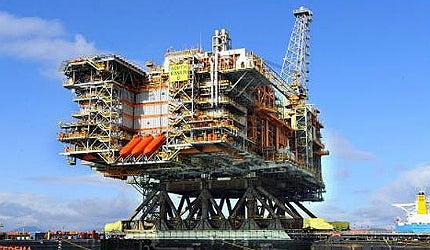 North Rankin redevelopment, or North Rankin 2 (NR2), project was approved by the North West Shelf Venture (NWSV) partners in March 2008. The $5bn project aims to pull out remaining low pressure gas from the ageing North Rankin and Perseus gas fields, therefore extending the supply of gas for another 25 years.

North Rankin and Perseus gas and condensate fields are located approximately 137km off of the north-west coast of Western Australia, in a water depth of about 125m. The two fields have been in production since 1984 and are part of the Woodside Energy-operated NWSV project, the biggest resource development in the history of Australia.

“The topside has been manufactured in South Korea by the world’s biggest shipbuilder Hyundai Heavy Industries (HHI).”

North Rankin redevelopment is currently the largest offshore project in Australia. It is being undertaken to extend the life of North Rankin and Perseus fields up to 2040.

The new facilities will provide additional compression to retrieve low pressure reserves from the two fields and will ensure gas supply even after 2013.

The main component of the NR2 project is the construction and installation of an additional gas processing platform named North Rankin B (NRB). The new platform will be linked to the existing platform, North Rankin A (NRA) via a 100m bridge.

Enfield oil field is situated in Production Licence WA-28-L, within the Greater Enfield Area, about 49km off the coast of Exmouth in Western Australia.

Once the new platform is installed, the NRB and the existing platform will operate as a single integrated unit, known as the North Rankin hub.

In addition, the project includes commissioning of new production facilities together with gas-condensate coolers and separators, three 27,000kW compression trains and electricity generation. Existing process facilities will also be modified to meet the new production requirements.

The project also includes renovation of North Rankin A and completion of necessary tie-ins, providing the new platform with living quarters and a helicopter deck.

North Rankin B, largest offshore platform in the world 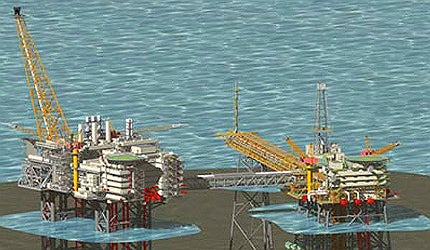 The topside has been manufactured in South Korea by the world’s biggest shipbuilder Hyundai Heavy Industries (HHI).

Weighing 58,000t and measuring 100m in length, 50m in width and 80m in height, North Rankin B is the largest offshore platform in the world. Scheduled to commence operations in 2013, the new platform will stand in water depths of about 125m.

The platform will be installed with a custom-built elevator for the safe and efficient transportation of crew and goods from one level to another.

Blacktip gas field is located 110km off the northern coast of Australia in the Timor Sea’s Bonaparte Basin.

NRB’s topsides weigh approximately 23,600t and will be installed by the float-over method. The platform’s deck will be supported by an eight-legged jacket whose weight will about 23,000t. The jacket itself will be 150m tall. Its piles will be tucked in a water depth of more than 300m below the sea level. The diameter of the piles will be 2.5m and the depth of the drilled hole will be about 182m.

The topside has been manufactured in South Korea by the world’s biggest shipbuilder Hyundai Heavy Industries (HHI). Substructures and piles were manufactured in Indonesia.

Front-End Engineering Design (FEED) for the NRB platform was undertaken by Eos Joint Venture, an unincorporated joint venture between WorleyParsons and KBR. The joint venture was again contracted in April 2008 to provide detailed engineering and procurement management services for the NR2 project.

“The $5bn project aims to pull out remaining low pressure gas from the ageing North Rankin and Perseus gas fields.”

Hook-up and commissioning (HUC) services for the NRB platform are being provided by Transfield Worley Services, a 50-50 joint venture between Transfield Services and WorleyParsons.

The elevator for the new platform was supplied by Kone in February 2012. Blackhawk Technology supplied the Neptune caisson sump pump for the project in January 2010.

J Ray McDermott was contracted in the last quarter of 2008 for the construction of the substructure including the jackets. Rolls Royce will supply three gas compression turbines for the NRB platform. Advanced Power, an MPower Group company, has supplied a black start generator (BSG) and an essential diesel generator (EDG).

In April 2008, Heerema Marine Contractors (HMC) entered into an agreement with Woodside Energy for the shipment and installation of substructure and topsides of the NRB platform. Grouting services for the platform’s installation will be provided by FoundOcean.

Mustang, a Wood Group Company, was contracted in March 2010 to verify the readiness of Woodside’s new offshore gas platform through independent assessment and verification.

Competentia
Competentia and our US consulting arm, Argonauta, provide the most...