Contracts in the pipeline segment in the oil and gas industry registered a decrease in activity by 18% in July 2022 with a total of 18 contracts, when compared with the previous month’s total of 22 contracts, according to GlobalData’s oil and gas contracts database.

A total of 18 contracts were recorded in the pipeline sector globally during the month, when compared with the last 12-month moving average of 35 contracts.

Oil and gas pipeline contracts by region in July 2022 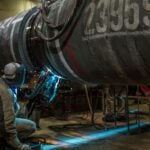 Europe held the top position with eight contracts and a 44% share during July 2022, followed by Asia-Pacific and Middle East with four contracts (22%) and three contracts (17%), respectively.

Contracts by scope of work in pipeline segment during July 2022

During the month, the majority of contracts in the pipeline segment were awarded in the procurement with 10 contracts, followed by design & engineering and construction with five and three contracts, respectively.