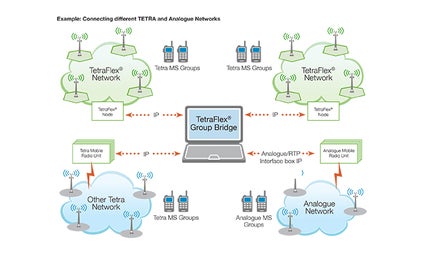 TetraFlex Group Bridge is a highly flexible solution. It can be used to perform group calls and SDS messages between independent networks, from one TetraFlex® network to any other TETRA network, or even from TETRA to analogue networks.

The TetraFlex Group Bridge solution is suitable for creating any cross-organisational communication between organisations that are normally organised on different networks. Typical examples include Group Calls between military, police and other emergency units, or even between local, regional or national networks during catastrophes and other mission critical operations.

With the TetraFlex® Group Bridge, clients can also connect portable TetraFlex solutions in remote locations to the main network, or extend it with indoor coverage. The TetraFlex Group Bridge also gives an advantage in supporting features for soft migration from analogue to digital TETRA networks.

In short, the TetraFlex® Group Bridge can support any communications interoperability challenge.

Complete interoperability and ease of use

One TetraFlex® Group Bridge can support up to 32 bridges, made up of as many as four different TETRA or analogue networks in any combination for each group. The TetraFlex Group Bridge comes with a user-friendly and intuitive graphical user interface, delivered as a software application, which can be installed on a Windows computer.

The Power of True Scalability

DAMM TetraFlex® Systems have been specifically designed to adapt or grow with you, without incurring major additional infrastructure costs. This increases functional efficiency while significantly...

A World of Professional Radio Communications

DAMM TetraFlex® Systems have been specifically designed to adapt or grow with you, without incurring major additional infrastructure costs.

TOTAL Antwerpen has more than 1,300 radio users every day, and approximately 70 groups, and with more than 60,000 calls every day the need for...