30,000 barrels of oil equivalent per day 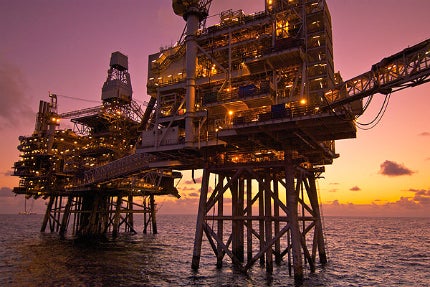 Alder is a high-pressure and high-temperature gas condensate field located in Block 15/29a of the UK Continental Shelf. The field lies in a water depth of 492ft (150m) in the central North Sea, approximately 100 miles away from the Scottish coastline and 37 miles away from the UK / Norway median line.

Alder was developed as a satellite of the operating Britannia field, located 27km east of it in block 16/26.

The contracts for major components of the subsea development project were awarded by Chevron in mid-2013. The final investment decision (FID) on the project was taken in January 2014 and approved by the UK Government.

The Alder field is estimated to contain approximately 4,820 million standard cubic metres (scm) of gas. It is expected to produce 110 million cubic feet of natural gas and 14,000 barrels of condensate per day. The field started production in November 2016.

Alder was discovered in 1975 as an Upper Jurassic reservoir with 9,440psi of wellhead shut-in pressure and 305°F (15°C) of reservoir temperature with the drilling of 15/29a-2 well.

Chevron had initially considered developing the field through floating production, storage and offloading (FPSO) solution by using round-hulled Sevan Marine type hull. The subsea development plan was, however, preferred over the FPSO plan in 2010 due to greater environmental risk of the latter.

The field’s development plan via subsea tieback to the Britannia platform received initial environmental approval from the Department of Energy and Climate Change (DECC) in August 2013.

Development plan for the Chevron-operated field

The field was developed by tying back to a single subsea well from Alder to the Britannia bridge-linked platform (BLP) through a 28km-long production flow line. Production commenced from a single production well initially. The second well will be drilled in the later phase of the field development.

The well heads were connected to a production manifold from where the reservoir fluids are transferred to the Britannia BLP via a 10in and 16in pipe-in-pipe system running parallel to an umbilical line.

A dynamically positioned (DP) reel-lay vessel is used for laying the pipes. Mechanical plough or jetting is used for trenching and burial of the flowline and umbilical.

The tied back pipeline uses the existing riser and J-tube on the Britannia BLP. The BLP was modified to include a new module, via which the Alder condensate is transported into the Forties pipeline connecting the Grangemouth oil terminal in the UK. The produced gas is conveyed through Scottish Area Gas Evacuation (SAGE) pipeline to St Fergus.

Contractors involved with the Alder field

The contract was executed by Technip’s operating centre in Aberdeen, UK.

Technip Group subsidiary Genesisof was responsible for the detailed design under the contract. The pipe-in-pipe was fabricated at Technip’s Evanton spoolbase, Scotland. The umbilical was manufactured by Technip’s subsidiary DUCO in Newcastle. Technip’s vessels, including the pipelay vessel Deep Energy, were used for offshore construction.

Aker Solutions was awarded the contract for the design, manufacture and supply of the subsea control system for the oil field development. The contract includes the hydraulic and electrical equipment to be installed at subsea location, as well as on the Britannia BLP.

Piper Alpha is an offshore oil and gas platform that suffered an explosion in July 1988, still regarded as the worst offshore oil disaster in the history of the UK.

Blackbird oil and gas field is located in Block 20/02a, in the UK section of the central North Sea.