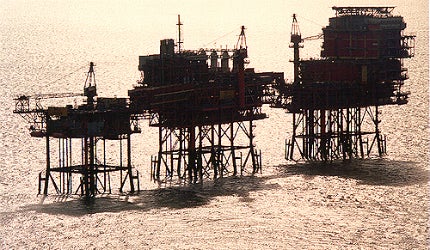 The Cygnus gas field is situated within UK Continental Shelf blocks 44/12a and 44/11a in 23m of water. The field is operated by Engie (previously GDF Suez), which also owns a 38.75% stake. Centrica has a 48.75% interest and Bayerngas holds the remaining 12.5%. Bayerngas acquired its interest from Endeavour in August 2010.

The Cygnus field is one of the largest gas fields in the southern North Sea and the largest to be discovered in the last 25 years within the Southern Gas Basin.

Islay is a gas and condensate field located in the UK waters of the North Sea.

In August 2012, the project partners sanctioned investments to develop the field. Production started in 2016. . At peak production, the field is expected to meet the demand of around 1.5 million homes.

Initial contracts worth £375m were signed in August by GDF SUEZ on behalf of the partnership to start the project. A total of £337m worth of contracts was invested in the UK, generating 1,200 jobs.

Approximately £1.4bn is being invested in the Cygnus project, 80% of which is being awarded to UK-based companies. In addition, 4,000 direct and indirect jobs are being created during the development and production phases.

The partnership welcomed the recent field allowance for new large shallow water gas fields by the UK Government, which provided the certainty and confidence to proceed with the development. Major contracts were awarded progressively.

Cygnus is located about 150km off the coast of Lincolnshire. It has gross 2P reserves of approximately 18 billion cubic metres.

The Cygnus project created 50 additional jobs in the Engie operational headquarters in Aberdeen and a further 100 jobs offshore.

“In total, approximately £1.4bn is being invested in the Cygnus project, 80% of which is being awarded to UK-based companies.”

The Cygnus gas field was discovered in 1988 while drilling the 44/12-1 exploration well, which identified a gas-bearing Leman reservoir. The following year, the field was appraised by well 44/11-2, which insured the presence of Leman and Carboniferous reservoirs in a different fault block.

The drilling of yet another appraisal well, 44/12-2, over the original discovery fault block confirmed the presence of gas.

The appraisal well drilling continued in February 2009 to evaluate the reservoir quality and fluid content of the primary Leman reservoir in the eastern part of the field. Drilling was also carried out to test the deeper Carboniferous reservoir as a secondary target.

Well 44/12a-3 confirmed the presence of gas in the Leman and Carboniferous intervals of the reservoirs. It was drilled by a Noble Ronald Hoope jack-up rig. The successful drilling of the 44/12a-3 appraisal well enabled further extension in the southern part of the North Sea. It was drilled to total depth of 3,790m and around 905,600 cubic metres of natural gas was extracted on daily basis during the testing period.

A fourth well, 44/12/a-4, was also drilled to a depth of 3,744m to identify the size of the field. The test flow rate was 32 million cubic feet a day. An additional appraisal drilling was also carried during the first quarter of 2010 over the western area of the field. Well 44/11a-4 indicated higher reserves and resource estimates, and extended the boundary of the field further to the north and to the west. It was drilled by an ENSCO 100 jack-up rig.

The well was drilled up to 12,207ft and found a good quality, gas-saturated Leman sand reservoir of 54ft, with a sand thickness of 130ft gross and 85ft of net pay.

The well tested at a rate of 28 million cubic feet each day. A sixth appraisal well, 44/12a-5, drilled in July 2010, confirmed the southern North Sea area to be one of the largest reserves in the UK. The reserves are estimated to range from 500 billion cubic feet to an upside of 1.2 trillion cubic feet. The DECC also extended the field licence to P1731 with additional blocks 44/11b and 44/12b.

Reserves at the Cygnus discovery

The Noble Ronald Hoope rig is owned by Noble Drilling and was built by CNIM at La Seine sur Mer, France, in 1982. The rig was used for drilling the 44/12a-3 well.

“The field development plan for the first phase of Cygnus was sanctioned by the UK’s Department of Energy and Climate Change.”

The field development plan for the first phase of Cygnus was sanctioned by the UK’s Department of Energy and Climate Change (DECC) in August 2009.

Sword CTSpace software was opted for document control and collaboration for the initial design phase of the project. The development plan for the field includes two drilling centres, four platforms and ten production wells.

Produced gas is exported to the Bacton gas terminal in North Norfolk via a 51km, 24in diameter export pipeline tied into the esmond transportation system (ETS) pipeline.

Contracts awarded for the UKCS-based field

In October 2011, AMEC was awarded the front-end engineering and design (FEED) contract for the Cygnus field. This was followed by a detailed $94m engineering design contract in August 2012.

Petrofac was awarded a $70m contract to provide construction and production monitoring services for the Cygnus gas field, in December 2016.