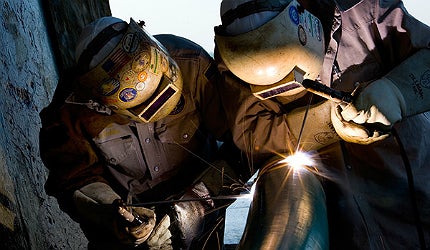 Islay is a gas and condensate field located in the UK waters of the North Sea. It is part of the Greater Alwyn area which contains a number of oil and gas fields, such as Alwyn, Nuggets, Ellon, Forvie and Jura. The area is owned and operated by Total.

Total began the field development in 2010. First production was achieved in April 2012.

The reservoir is located in a faulted panel three kilometres east of the Jura field which came on stream in 2008. The water depth at the location is 120m (394ft).

Total discovered the Islay field in June 2008. The discovery well, in the Brent reservoir, was drilled by the floater rig Transocean John Shaw. Gas was discovered after drilling to more than 4,000m (13,123ft).

During production tests, the well recorded 1.22 million cubic metres of gas each day (43 million cubic feet a day). The field is estimated to contain reserves of approximately 17 million barrels of oil equivalent (mmboe).

The Islay field development plan submitted by Total was approved by the authorities in July 2010.

As the field area is located in both the UK and the Norwegian waters, the company had to obtain permission from the UK Department of Energy and Climate Change, as well as the Norwegian Ministry of Petroleum & Energy.

The development plan involves linking the Islay subsea wells to the Alwyn North production platform. The first production well was tied to the platform in April 2012 using the existing subsea infrastructure.

Alwyn North has a steel jacket with four legs, which is linked by a 73m height steel bridge. It is 31m above the water. The drilling derrick is situated above the wellhead area.

“The Islay field development plan submitted by Total was approved by the authorities in July 2010.”

Diving support vessels Skandi Arctic and Skandi Achiever were used for subsea installations. The subsea pipeline was laid with the help of the Apache II pipe lay vessel. The installations began in 2011.

Apache II is an advanced pipe lay vessel owned by Technip. The vessel employs a reel lay method and is suitable for small and medium diameter pipelines. It features two knuckle boom construction cranes of MacGregor Hydramarine 100 Te make on the port side for subsea lifts. It can accommodate 120 people in 72 cabins. The service speed of the vessel is 13kts.

Skandi Arctic features a saturated diving system for 24 divers in six chambers. It has a DP III system, remotely operated vehicle (ROV) hangar, a 400t crane and a helideck.

Skandi Achiever features a saturated diving system for 18 divers. The DP II vessel has a ROV hangar with doors, a large offshore crane and a helideck for Sikorsky 92. It can accommodate 100 people onboard.

The engineering, procurement and construction (EPC) contract for Islay subsea development was awarded to Technip in September 2010.

Valued at €70m ($94m), the EPC contract involves design, engineering, construction and installation of the entire subsea infrastructure, as well as project management.

The pipeline installation was handled by Brown & Root, while Heerema installed the jackets and topsides. The NAA hook-up was installed by P & W Offshore.

Production rates and technology at the North Sea field

Islay reached its design production capacity of 15,000 barrels of oil equivalent each day (boe/d) in 2012. At peak, it will be able to produce 2.5 million cubic metres (Mmcm) of gas a day.

Islay is the first offshore field in the world to feature electrically trace heated pipe-in-pipe (ETH-PIP). The innovative technology helps to achieve flow assurance by avoiding pipeline blockages due to wax or hydrate formation. It significantly reduces the operational costs and improves production operability in shallow and deep water fields, says Technip.