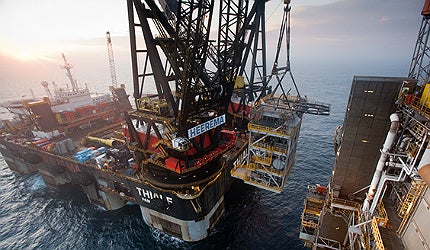 Devenick gas field is situated in Blocks 9/29a and 9/24b of the UK Continental Shelf (UKCS) in the central North Sea, in water depths of 116m. It is a high pressure, high temperature (HP-HT) gas condensate discovery located approximately 145 miles (233.3km) north-east of Aberdeen, Scotland, and two miles (3.2km) from the British / Norwegian international boundary.

BP operates the Devenick field, with a net working interest of 88.7%. The remaining 11.3% stake is owned by RWE Dea UK, a subsidiary of the German electric utility RWE.

The field was successfully brought into production in the first week of October 2012. The development required an investment of around £650m (in excess of $1bn).

Discovery, geology and reserves of Devenick

The Devenick discovery was revealed by BP in January 1983. The discovery was evaluated by drilling three appraisal wells between 1986 and 2001.

The Devenick reservoir consists of Brae sandstones belonging to the Jurassic age. In essence, the geological structure of the reservoir is nearly flat, with a shallow overall depth. The reservoir and the immediate sedimentary rock above are cut by small faults which cannot be averted by the well path.

The reservoir holds light gas condensate. The condensate to gas ratio (CGR) from South Devenick, where the initial two production wells have been drilled, is 40:55stb per million metric standard cubic feet (mmscf).

The field is estimated to contain about 430 billion standard cubic feet (bcf) of gas. The initial production rate is expected to be 100mmscf/d. The field is likely to remain in production for about 12 to 13 years.

The environmental statement (ES) for the development of BP’s Devenick field was submitted to the UK Department of Energy and Climate Change (DECC) in March 2010. The DECC approved the field development plan (FDP) for Devenick in December 2010.

The field is initially being exploited through two gas production wells (S1 and S2). These wells are tied-back to a four-slot subsea manifold through a short infield flowline. From the manifold, the combined gas is sent to the East Brae platform via a 21-mile (33.8km) production pipeline measuring 16in in diameter. Devenick’s gas is finally transmitted to the St Fergus terminal via the SAGE transportation pipeline system.

The host platform is an integrated platform, secured on a four-legged steel jacket. It is located in Block 16/03a of the UKCS and is operated by Marathon Oil. The platform was modified to handle production from the Devenick field.

In October 2011, a 600t module was installed on it to accept gas and condensate from the field. The platform was installed with a new riser, as well as a production separator. New hydrocyclone liners were fitted for processing the produced water.

Subsea infrastructure at the HP-HT discovery

In order to exploit the Devenick field, new subsea infrastructure has been established within the development area. Wellheads and fishing-friendly Christmas trees are installed at the two production wells to control the flow of fluid. The wellheads are connected to the manifold through a specially insulated flowline.

The manifold, which can support up to four wells, receives hydrocarbons from the two developed production wells and transmits them to the host platform. The manifold is mounted with a roof panel for protection.

An integrated electro-hydraulic control umbilical with conduits for chemical injection is installed between the platform and the manifold. This main umbilical facilitates transmission of hydraulic fluids, electrical supplies and communication. An infield umbilical is fitted between the manifold and the Christmas trees.

Contractors involved with the UKCS-based field

“The DECC approved the field development plan (FDP) for Devenick in December 2010.”

In June 2010, Isleburn, a British company involved in the manufacturing of equipment for energy industry, was contracted to fabricate the Devenick manifold along with a subsea isolation valve.

In July 2010, Technip was awarded a contract to provide project management, design, construction, installation and commissioning of the production pipeline. The contract also included the supply of a 16in carrier pipeline, a 3in piggyback methanol line and infield pipelines.

Subsea umbilical system for the Devenick project was supplied by Nexans. The new platform module was designed by Aker Solutions and constructed by McNulty Offshore Construction. JP Kenny was responsible for the subsea engineering and package management.

Front end engineering design (FEED) for the East Brae platform modification was carried out by Andrew Palmer & Associates, a subsidiary of Penspen Group. The design and fabrication of the platform’s topsides were undertaken by Petrofac.

Juliet is a shallow water gas field situated in the block 47/14b of the UK Continental Shelf in the southern North Sea, at a water depth of 193.6ft.