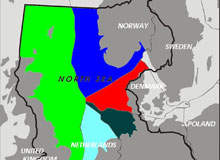 Located in Block 21/5A of the UK continental shelf, the Enochdhu oil field is the fourth field developed in the Greater Britannia area, after the Britannia, Brodgar and Callanish fields. It lies in a water depth of 459ft (140m) in the central North Sea, approximately 190km east of Aberdeen.

The offshore field is jointly owned by ConocoPhillips and Chevron. ConocoPhillips is the operator. The project received approval from the UK Department of Energy and Climate Change (DECC) in September 2013.

The first oil production from Enochdhu was achieved in June 2015. The initial peak production is estimated to be 10,000 barrels of oil equivalent per day (boe/d).

The Enochdhu field licence was awarded to ConocoPhillips and Chevron in 1970 as part of the P.103 Northern Waters 3rd round licensing. The exploration well 21/5A-6 drilled in December 2005 discovered the field containing black oil of the Palaeocene reservoir.

The proposal to develop the field as a subsea tieback to the existing Callanish and Britannia facilities was submitted for approval in 2011. Commercial oil production from Britannia started in 1998. The Callanish and Brodgar fields were developed as tie-backs to the Britannia platform. Both the fields were brought on stream in 2008.

The initial field development involves one production well which was drilled in May 2015. One more production well is planned to be drilled in the future. A conventional semi-submersible drilling rig was used to drill the well. A riser-less drilling technique with the use of seawater and high-viscosity sweeps was employed for drilling the top-hole sections. The drilling of lower sections involved the use of low toxicity oil-based mud (LTOBM).

The production manifold has a provision for one more production well in future. The manifold is tied back to the existing Callanish manifold via a 7.5km subsea bundle comprised 8in the multi-phase production pipeline, 6in gas lift pipeline, and electro-hydraulic controls (EHC) umbilical.

The subsea bundle with integrated towhead structures at both ends are routed to a new tie-in manifold stationed adjacent to the Callanish manifold.

The produced oil and gas are sent via the Callanish manifold to the Britannia platform for processing. The processed oil is transported through the Forties pipeline system to the Kinneil terminal. Gas is sent through the Britannia gas export pipeline to the Southern Area Gas Evacuation (SAGE) terminal at St Fergus in Scotland.

Subsea 7 was awarded a contract in June 2012 to provide the engineering, design, procurement, fabrication and installation of subsea bundle, towheads and spools. The contract also includes the installation of jumpers and control modules.

Subsea 7 manages the project from its Sutton office. Fabrication of the subsea bundle will be performed at its Wester Site in Wick, Scotland. The vessels used for the offshore project include Seisranger, Seven Sisters and Acergy Discovery.