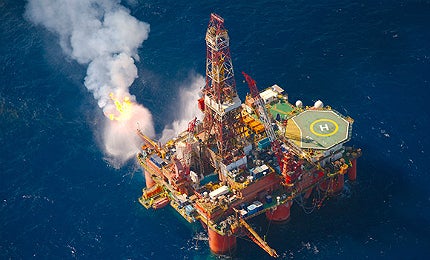 Fletcher Finucane oil project lies within block WA-191-P in the Carnarvon Basin, offshore of Western Australia. The project involved the development of two oil fields – Fletcher and Finucane South. The fields lie in a water depth of 160m and are estimated to contain recoverable oil reserves of around 14 million barrels.

The project produced first oil in May 2013 and is expected to have an average gross production of 15,000 barrels per day during the first year of operation.

Santos is the operator of the field with an equity share of 44%. Partners in the project include Kufpec Australia with 33.4% and JX Nippon Oil & Gas, with a 22.6% share. Estimated investment in the project was around $490m.

Development of the project was approved by Santos in January 2012. Dual field development helped speed up the production of first oil.

Drilling the Fletcher and Finucane wells

Fletcher oil field was discovered in 2007. The discovery is located north of the dampier sub basin and 17km to the east of the existing Santos-operated Mutineer Exeter field facilities.

In May 2011, the Finucane South-1A well led to the discovery of additional oil reserves. The well was drilled using the semi-submersible drilling rig Stena Clyde to a depth of 2,057m.

The field development plan included three subsea production wells tied back to the existing MODEC Venture 11 FPSO at the Mutineer-Exeter field. The project is expected to increase the field life of Mutineer-Exeter by four years.

The development wells were drilled using the Nan Hai 6 Mobile Offshore Drilling Unit. Manufacturing of most of the subsea facilities was completed ahead of schedule.

The equipments on the Mutineer-Exeter FPSO were completed in Singapore and later shipped to the field for installation.

Oil production from the Fletcher Finucane project started in May 2013.

The subsea field development infrastructure included flowlines, umbilicals and manifolds. The subsea installation operations for the project were carried out using the dive support vessel (DSV) Rockwater 2 operated by Subsea7.

Technip won a flexible pipe supply contract in March 2012. The contract scope included the management, engineering and supply of 31km-long 9in and 10.2in flowlines and 22km-long 3in services lines. The Fletcher and Finucane contract is the largest awarded to Technip’s flexible pipe plant in Malaysia.

In January 2012, Subsea7 was selected to supply umbilicals, risers, flowlines and related structures as part of a contract worth $60m. The work included the management, engineering and installation of the equipment to connect the wells to existing Mutineer Exeter field facilities.

The Pluto LNG project is located 190km north-west of Karratha, in Western Australia, in the Northern Carnarvon Basin.