Three billion cubic feet of gas and 45,000 barrels of gas condensates a day

Expand
The Kish gas field is located below Kish Island in the Persian Gulf, Iran. Image Courtesy of Pesare amol.
The Kish offshore field was discovered in 2006 by the National Iranian Oil Company (NIOC). Image courtesy of PEDEC.
The processed gas from Kish refinery will be transmitted to the IGAT-7 pipeline (Peace pipeline). 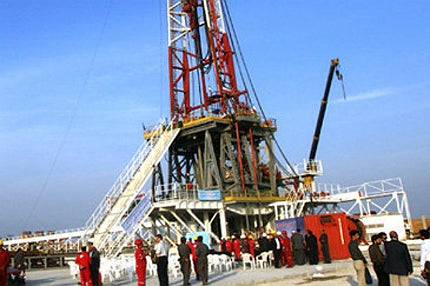 Located below Kish Island in Persian Gulf, Iran, Kish Gas Field has been under development since 2012. The field was discovered in 2006 by the National Iranian Oil Company (NIOC) and is the world’s fifth biggest offshore gas field.

The Iranian Ministry of Petroleum for Planning and Supervision on Hydrocarbon Reserves selected Petroleum Engineering and Development Company (PEDEC) in October 2011 to perform development activities at the field.

PEDEC will develop the field in three phases at an estimated cost of $2.2bn. The first phase is expected to be operational by November 2015, according to Iranian news agencies. Final drilling was in progress as of October 2014.

In July 2010, NIOC signed a $10bn deal with a domestic consortium for the development of the field. The Bank Mellat-consortium will provide financing for the project.

The funding for upstream activities will be handled by NIOC and downstream by a consortium of Iranian banks and financers.

Gas and condensate reserves at the Iranian field

"NIOC signed a $10bn deal with a domestic consortium for the development of the field in July 2010."

Phase I of the Kish gas field will include a development plan to enable production of one billion cubic feet of gas from the reservoir.It will include drilling of 13 production wells, overhauling of one onshore well and construction and installation of two drilling rigs. It will also include construction of refinery facilities, gas transmission pipelines, reservoirs and infrastructure facilities such as electric power plants, water treatment plants, an industrial effluent treatment plant and roads. Four delineation wells will be drilled, with two of them 6km south-west of Kish Island.

Geological studies on the reservoir, examination and evaluation of surface facilities, and economic feasibility studies for the field will be also performed during the first phase of the project.

The second and third development phases of the field will produce one billion cubic feet of gas a day each when completed.

Gas produced by Kish will be transferred to gas refinery to further produce light gas and condensate.

"The second and third development phases of the field will produce one billion cubic feet of gas per day each when completed."

The refinery will process the gas to produce light gas, which will be transmitted via a 94km-long, 56in-diameter pipeline to the seventh cross-country (IGAT-7) pipeline of Iran.

The condensate produced during gas processing will be transmitted to the single buoy mooring (SBM) in the Persian Gulf via a 5km-long offshore pipeline.

The Kish gas refinery will be built in the mainland Garzeh region near Aftab port to reduce environmental impacts at Kish Island.

PEDEC signed an agreement with Nardis, Farab and Namaran in April 2012 on behalf of NIOC. The agreement includes construction of a refinery unit and gas transport lines. The $1.7bn contract includes procurement of engineering support services for the project.