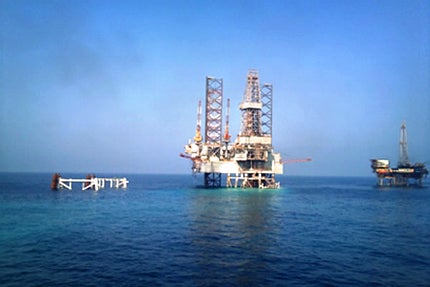 Reshadat, which was known as Rostam oil field before 1979, was discovered in 1965 and was developed by the Iranian-Italian company, IMINICO. The oil field is being operated by Iranian Offshore Oil Company (IOOC).

The oil field was first brought on-stream in 1968. The central complex of the field (R7) was, however, damaged and set ablaze by American warships during the Iran-Iraq war in 1986. Only the satellite wellhead platforms of the oil field (R3 and R4) were in use for oil extraction. The oil extracted through 14 wells is currently being sent to the Lavan Island for storage.

The Reshadat renovation and development project is part of Iran’s plan to increase production capacity of the Persian Gulf oil fields including Reshadat, Hengam, Forouzan and Hendijan, under the "Mehr-e Mandegar" scheme.

The redevelopment project will boost oil production from the offshore field significantly, by replacing the existing facilities with new infrastructure. The output of the renovated oil field is expected to rise up to 22,000 barrels per day (bpd) in 2013 and 75,000 bpd by 2016.

"The Reshadat renovation and development project is part of Iran’s plan to increase production capacity of the Persian Gulf oil fields."

Five new platforms are being built at the oil field, including one production platform (P4), one quarters platform (Q4), two wellhead platforms (W4 and W0 ) and one flare platform (F4).

All wellhead fluids of the oil field will be sent to the P4 platform, where the fluids will be separated into specified oil products, water steam and gas steam.

A total of 28 wells have been drilled for water injection into the field in order to improve oil recovery.

The oil production from the field is expected to reach 22,000bpd with the commissioning of four new wells by the end of 2013. A total of 30 wells have been planned at the field to raise the production up to 75,00bpd in future. The offshore field is also expected to produce 40 million cubic feet of gas.

The jackets for all the new platforms of the field were installed by 2012. The W0 jacket weighing 800t and measuring 44m high was installed with the help of HL5000 vessel in August 2008.

"The redevelopment project will boost oil production from the offshore field significantly."

The P4 jacket, the largest jacket in the Persian Gulf, was the last jacket installed at the field. The load out operation of the 229ft high P4 jacket weighing 3,100t was carried out with the help of FLB 129 barge in April 2011. The jacket was installed by Sadaf 3000 vessel in November 2011. The pile driving operation for the jacket took 40 days to complete. The P4 platform weighs 4,500t with its stabilising pillars.

The jacket installation activities posed a challenge as they were performed amid pre-existing platforms.

The pipe laying for the project was completed by the beginning of 2013. A total of 8,400 sections of 16-inch pipes coated with 40mm of concrete were installed. The pipelines include a 16-inch diameter, 106km-long pipeline from Reshadat oil field to Lavan Island, and three 5.5km long pipelines inside the field. Two 12km-long offshore cable lines have also been installed as part of the project.

The joint venture of AMID Engineering and Pegasus-Qeshm was awarded the contract to carry out survey, soil investigation, inspection of existing facilities and detailed design documentation for the oil field renovation project during 2004-2005.

Iranian Offshore Engineering and Construction Company (IOEC) was responsible for the engineering, procurement, construction and installation (EPCI) of jackets and pipelines at the oil field renovation.

SADRA is the EPCI contractor for the topsides and bridges of the oil field. It subcontracted the detailed engineering work to WS ATKINS.

Platform structures of the oil field were built by Tasdid, an affiliate company of IOEC. The detailed jacket design and the conceptual pipeline design for the oil field was subcontracted to Pegasus-Qeshm.