70km offshore of the Congolese coast 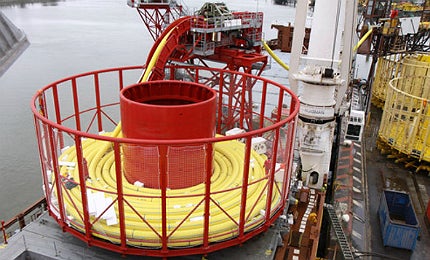 Moho-Bilondo oil field, which was commissioned in April 2008 for commercial production, is the first ultra-deepwater offshore field of the Republic of the Congo. The field is located approximately 70km off of the Congolese coast, at water depths ranging between 600m to 900m.

The French oil major Total, through its Congolese subsidiary Total E&P Congo, holds a working interest of 53.5% in the Moho-Bilondo project and is the operator of the field. Chevron and the Congolese national oil company, SNPC, have working interests of 31.5% and 15% respectively in the field.

Discovery of the Moho-Bilondo field

The Moho-Bilondo permit, in present state, is made up of four reservoirs. The first discovery, Bilondo, was revealed in January 1995. Mobim, the second reservoir, was discovered in August 2004. The third (Moho Nord Marine-1 and 2) and fourth (Moho Nord Marine-3) deepwater discoveries were made in 2007 and 2008 respectively.

Moho Nord Marine-1 and Moho Nord Marine-2 wells were drilled in April 2001. The first well was drilled to a total depth of 2,645m, while the second well reached a depth of 2,340m. While the former well encountered around 140m of oil, the latter had encountered 78m and 22m in a set of two Upper Miocene oil reservoirs.

The second and third Bilondo Marine wells were drilled in January 2011, to a total depth of 1,800m. The two wells encountered a combined gross reservoir of 121m.

Mobim and Bilondo reservoirs are believed to have been created some 20 million years ago following subsea avalanches. The reservoirs are medium in size and comprise of a combination of sand channels and shale deposits. The accumulation of sediments on the deep seabed led to the gradual transformation of organic matter into viscous oil.

The oil belonging to Bilondo reservoir was found to have been deposited in small sand channels. The Mobim oil is stocked in two distinct reservoirs, which are divided by a thick layer of shale. The Mobim crude is approximately seven times less viscous than that in Bilondo.

The Moho-Bilondo project is being developed in two phases. The first phase, which comprises of the Mobim and Bilondo reservoirs, was brought on stream in the second quarter of 2008. Plateau production of 90,000 barrels of oil each day was achieved in June 2010.

“Chevron and the Congolese national oil company, SNPC, have working interests of 31.5% and 15% respectively in the field.”

As per the phase one development plan, which was sanctioned by the Congolese Government in August 2005, the Moho-Bilondo field is currently exploited through 14 wells. These include five producers and three water injectors on Mobim, and four producers and two water injectors on Bilondo. All the wells are tied-back to a floating production unit (FPU). From the FPU, the oil is sent to Djeno terminal, via an export pipeline measuring 80km in length and 16in in diameter.

Subsea production systems in place include 14 wells with vertical christmas trees and two manifolds, with six and four lateral outlets.

The subsea infrastructure includes two clusters, each of which is tied to an 8in loop with flexible risers, an electro-hydraulic control umbilical and a gas lift and methanol umbilical; two 8in water injection lines, one from Nkossa to Bilondo and another from the FPU to Mobim; and a 6in import / export gas pipeline to Nkossa.

Construction on the second phase, which aims to develop the northern part of the Moho-Bilondo licence, is scheduled to start in 2013 soon after the completion of the FEED (front-end engineering design) studies. The project is officially known as Moho North or Moho Nord project. It will require an investment of $8bn.

In September 2005, FMC Technologies was awarded a $115m contract to supply subsea systems for phase one of the Moho-Bilondo project. The contract was completed in 2007 and included deliveries of subsea trees, manifolds and production control and intervention systems.

The Moho-Bilondo FPU was designed by Doris Engineering and built by Hyundai Heavy Industries (HHI) under a $400m engineering, procurement, construction and installation contract. Yokogawa and Omega acted as automation contractors for the production unit.

In August 2012, HHI and Doris won an engineering, procurement and construction contract for a tension leg platform (TLP) for the Moho Nord project. The 13,000t TLP will have 27 well slots. Aker Solutions has been commissioned to deliver the subsea production system for the project.

Kizomba field lies in Block 15, offshore of Angola, marking one of the first tranches of deepwater acreage offered by the Angolan Government.

The Etame offshore field was discovered in 1998 by Vaalco Energy.