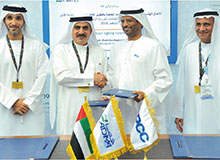 The Nasr / Al-Nasr oil field is located approximately 130km northwest of Abu Dhabi City in UAE, which is the seventh biggest oil-producing country. The first oil from the field was produced in January 2015, concluding the early development phase (Phase I).

The Nasr Phase II Full Field Development Project, aimed at increasing the field’s oil production capacity to 65,000 barrels per day (bpd) from the existing capacity of 22,000bpd, is underway and is expected to conclude in the first half of 2019.

The Nasr field development forms part of Adma-Opco’s overall plan to fast track the development of its new fields, including Satah Al Razboot (SARB) and Umm Lulu, and increase the company’s production capacity by an additional 270,000bpd.

Nasr Phase I involved the installation of two wellhead towers (WHT 1&2) and a manifold tower (MFT-1) connected to the neighbouring facilities at Abu Al Bukoosh (ABK) and Umm Shaif Oil Fields. Oil produced from the field is transported to Das Island through an existing subsea pipeline and further supplied to customers primarily in Japan and other Asian countries.

It also includes the installation of 44km subsea power and 55km infield cables to connect the complex with the existing power generation facilities at Umm Shaif Super-Complex and Das Island. The existing manifold and wellhead towers at Nasr field will also be modified under the contract.

Package 1 involves the construction of seven wellhead towers and the installation of 110km of infield pipelines, an excess gas pipeline of 32km and an export oil line of 70km. Package 3 involves the provision of project management consultancy (PMC) services for the entire project.

The engineering, procurement, construction and installation (EPCI) activities for Phase 1 were performed by Larsen & Toubro (L&T). The Project Management Consultancy (PMC) services were provided by Amec.

Complete telecoms and security system package for the project was supplied by 3W Networks.

The front-end engineering and design (FEED) studies for Phase II were performed by Fluor Offshore Solutions, while the Health, Safety & Environmental Impact Assessment (HSEIA) was conducted by Dome.

The EPC contracts for Packages 1 and 2 were awarded to National Petroleum Construction Company (NPCC) and Hyundai Heavy Industries (HHI) respectively. The contract value for the former is $792m, while that for the latter is $1.938bn. The engineering design services contract for Package 2 was awarded to KBR. The Package 3 contract worth $206m was awarded to Technip.