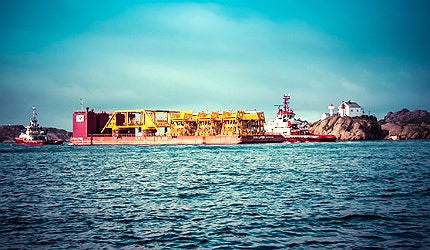 Skuld offshore field, formerly known as Fossekall / Dompap, is located within the Halter Bank area, north of the Norne Field in blocks 6609/10 and 6608/11 in the Norwegian Sea. The field is situated in water depths of about 360m.

Statoil is the owner and operator of Skuld, with a 64% interest, while Petoro and Eni are its partners and hold 24.5% and 11.5% interests respectively.

The overall investment for the development of Skuld is expected to reach NOK9.8bn ($1.65bn). Statoil received the consent from the Petroleum Safety Authority of Norway to operate the production facilities in December 2012. Production commenced in March 2013 and is expected to continue until 2030.

Geology and reserves of the Skuld field

“The overall investment for the development of Skuld is estimated to be NOK9.8bn ($1.65bn).”

Oil and gas at the Fossekall prospect and gas at the Dompap prospect are found in the Are formation in the lower jurassic rocks. The Skuld field is estimated to hold 90m barrels of reserves.

The offshore field is tied to the Norne production vessel through a 26km insulated production line and umbilical measuring 14in in diameter. With the discovery of the two prospects, the lifespan of the Norne field has also been extended by five years, from 2016 to 2021.

The project implements the direct electric heating (DEH) system for the smooth flow of gas and oil through the pipeline. The system allows alternating current (AC) to pass through the pipeline walls, providing temperature control to avoid the formation of wax and hydrate.

The plan for development and operation (PDO) of the Skuld field was submitted in 2011 and was approved in January 2012 by the Ministry of Petroleum and Energy. The first subsea tree for the project was installed in November 2012.

The engineering, procurement and construction (EPC) contract for the Skuld offshore field development was awarded to Aker Solutions. The NOK1bn ($180m) contract primarily involved supplying the template manifolds and subsea trees, including control and tie-in systems.

“Statoil is the owner and operator of Skuld, with a 64% interest, while Petoro and Eni are its partners.”

Baker Hughes was contracted to provide certain drilling works for the Skuld offshore field. The contractual scope includes directional drilling, measurement and logging works, mud logging, onshore support and engineering services. The contract is being implemented as part of a larger contract, under which the company is providing drilling services for 25 fields within the Norwegian Continental Shelf (NCS).

Pipe laying and marine works for the project were carried out by Subsea 7. The contract value was NOK970m ($175m). Subsea 7 also supplied the glass reinforced polymer (GRP) covers, riser base, pipeline end terminations (PLET), In-line Tee and line pipe coating for the project.

Emerson Process Management successfully deployed for the first time its Roxar Downhole Wireless PT Sensor System at the Skuld offshore field in 2014. The sensor, fitted behind the casing, helps to monitor the temperature and pressure in the subsea well in real time.

Aibel carried out the required modifications to the Norne vessel to enable it receive production from the Skuld field. Nexans supplied the DEH system for the pipelines and also the piggyback cable for the project.

Tyrihans is located in the Halten Bank area of the Norwegian Sea, 35km south-east of the Kristin field, in roughly 285m of water.

The Åsgard oilfield lies on the Haltenbank in the Norwegian Sea, 200km offshore Norway and 50km south of Statoil’s Heidrun field.

Hampidjan
Founded in 1934 as an industrial venture in Reykjavík to...
SUBSCRIBED