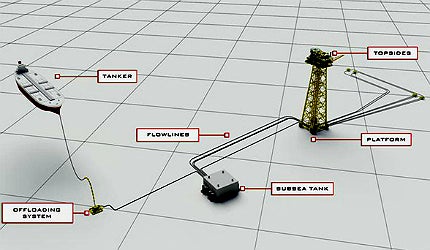 Solan oil field lies in block 205/26A of production licence P164 located in the UK North Sea. It is located west of the Shetland Islands in 135m-deep waters. Premier Oil is the operator of the field with 100% interest.

The Field Development Plan (FDP) for the Solan field was approved by the UK Government in April 2012. First production from the field was achieved in April 2016. Initial production rate is expected at 24,000 barrels of oil each day.

The field has an estimated life of 20 years. The project is estimated to attract an investment of $850m.

Discovery and drilling of Solan

Solan was discovered in 1991 by Amerada Hess (now, Hess Corporation) with the drilling of the 205/26a-4 vertical discovery well. The well flowed at a rate of 8,346 barrels of oil per day (bopd).

“The Field Development Plan (FDP) for the Solan field was approved by the UK Government in April 2012.”

Amerada carried out a 3D field survey of about 260m² in 1993. Based on the survey, Amerada drilled three appraisal wells during the 1990’s. The company did not undertake development due to low oil prices and volumetric risk.

The appraisal activities proved the feasibility of the field development and a northern extension of the field, called the Strathmore discovery. Premier became a partner in the Solan field in 2011.

The Strathmore discovery is highly economical but there are no immediate plans for its development. The partners may consider its development in the future as a tie-back to the Solan platform using a single depletion well.

Geology and reserves of the North Sea field

Solan includes a combined structural / stratigraphic trap containing an 850ft-high hydrocarbon column of the Jurassic age. The accumulation is spread over an area of 7.1km². It is enclosed by claystones of the Kimmeridge Clay Formation on the top and Lower Solan Mudstone at the base. The oil present in the reservoir has medium-viscosity with low gas-to-oil ratio.

“The Strathmore discovery is estimated to contain three million barrels of oil equivalent.”

The wells are tied back to the Solan platform through subsea flowlines and control lines.

Produced oil is stored in a specially designed 300,000 barrel subsea storage tank. The tank has avoided the need to build a costly submarine pipeline. It also greatly reduces the impact on the environment. The oil will be transferred from the tank to shuttle tankers.

Drilling activities commenced in April 2013. The production and injection wells will be fully commissioned in the second half of 2016.

The Solan platform is supported by a piled steel jacket. The topsides weigh 3,500t and the jacket weighs 8,000t. The platform is designed to process up to 28,000bopd of dry oil and 35,000bopd of liquids.

The facility can accommodate 30 men and will be manned only during the first year of its operation. It has sufficient capacity to support third-party tie-ins. Smaller accumulations in the area, which were earlier uneconomical to be developed, can be tied back to the Solan facility.

Contractors involved with the Solan project

Atkins Global was responsible for the structural design and assessment of the offshore facilities. Ocean Installer has been contracted to carry out offshore survey for the project. The company deployed its Normand Clipper vessel to conduct the survey.

Awilco Drilling is providing drilling services for the project. The procurement and fabrication of the topsides and jacket of the processing platform has been awarded to Burntisland Fabricators as part of a £145m ($233m) contract.

Two offshore grouting contracts were awarded to FoundOcean, with Heerema Marine Contractors and Bibby Offshore awarded two subcontracts to FoundOcean for providing grouting services for the project. The contractual scope includes structural grouting for the 8,000t Solan platform jacket, the specially designed 300,000bbl subsea storage facility, and pile-grouting for the offloading system base. The offloading system carries oil to a shuttle tanker from the subsea storage facility.

Premier Oil signed a three-year contract worth more than £30m with Aker Solutions in April 2013, entitling Aker to provide hook-up, commissioning and facility management services at the field.

Burntisland Fabrications (BiFab) was contracted in 2012 for the procurement and construction of the topside and the jacket. BiFab’s Methil, Burntisland and Arnish manufacturing facilities were involved in the work. Offshore Design Engineering acted as a subcontractor to BiFab for the detailed design stage of the project.

Devenick gas field is situated in Blocks 9/29a and 9/24b of the UK Continental Shelf (UKCS) in the central North Sea, in water depths of 116m.

Rosebank oil and gas field is located offshore of the Shetland Islands, in the UK.

Taking on the circular economy in oil and gas