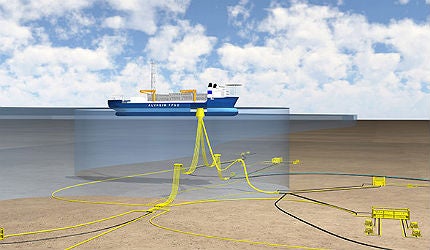 Volund oil field is located just over six miles south of Alvheim oil field, in Block 24/9 of the North Sea. The water depth in the location varies between 395ft and 425ft. Initial production from the field began in September 2009, and regular production started in April 2010.

The Volund field is covered by production licence PL150. Marathon Petroleum Norge, a wholly-owned subsidiary of Marathon Oil Corporation, owns a 65% working interest in the project and is the operator of the field. The remaining 35% stake is owned by the Swedish oil and gas exploration and production company Lundin Petroleum.

Discovery of the Volund oil field

Volund oil field was originally known as Grieg, at the time of its discovery in 1993 by Fina. Further exploration activities of the discovery were postponed at that time as its development was not economically viable.

Marathon, the licence holder, began exploration on a nearby prospect named Hamsun in 2003. The prospect exhibited recoverable amounts of hydrocarbons. Further studies undertaken in 2004 established that the two prospects, Grieg and Hamsun, are parts of common reservoirs and are related to each other.

Marathon initiated planning phase in 2005, and in early 2006 the two fields were joined to form the Volund oil field.

Geology and recoverable reserves at Volund

The Volund field reservoir is of the Palaeocene age and was developed due to intrusions of arenaceous rock in the Heimdal Formation, which in turn percolated into the overlaying Balder Formation in the early Eocene era.

Plan for development and operation (PDO) of the Volund field was ratified by the Norwegian Ministry of Petroleum and Energy in January 2007. The development plan called for the drilling of three production wells and a water injection well. These wells were developed as a subsea tieback to the Alvheim floating, production, storage and offloading (FPSO) vessel.

The Alvheim FPSO was originally a multi-purpose shuttle tanker. It was converted into an FPSO by Keppel Shipyard, in February 2006.

Drilling development for the second phase, which involved drilling of two multilateral production wells, was started in the fourth quarter of 2009 and was completed in the third quarter of 2010.

All the oil producing wells were put into production in August 2010.

Pressure support for hydrocarbons production is provided by the single water injection well. Water produced on the Alvheim FPSO is used for injection.

An additional development well is planned to be drilled in the last quarter of 2012.

Transportation of hydrocarbons to the Alvheim production facility

Recovered crude oil from the Volund field is piped to the Alvheim production facility. From here, the oil is shipped to market by shuttle tankers.

“Recovered crude oil from the Volund field is piped to the Alvheim production facility.”

Associated gas is exported to the St. Fergus gas plant in the United Kingdom, via the Alvheim to Scottish area gas evacuation (SAGE) pipeline.

Acergy, which became part of the Cayman Islands-based Subsea 7 in 2011, won a $140m contract in February 2007 for the pipelay and construction work on the Marathon operated Block 24/9. The engineering, procurement, installation and commissioning (EPIC) contract called for installation of about 18.6 miles of production, gas lift and water injection pipelines.

The company also provided EPIC of a control umbilical, a production manifold weighing about 160,000kg, and a choke and metering skid. The scope of work also included installation, hook-up and commissioning of the subsea control system.