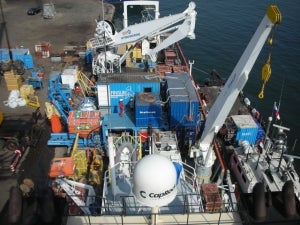 Launched in 2013, the Raffaella saturation system is designed to operate in deep water and has recently successfully completed its first shipyard project in North Africa, in the Petrobel area of Port Said, Egypt. The project included the placement of ten spools from 16in to 22in at an operational depth between 80m and 90m.

The key features of the system are its weight (100t) and its small footprint; it occupies just 70m², optimising transport and assembly times and lowering costs related to mobilisation.

It took only 29 days from the signing of the contract to the first dive, with a transfer from Genoa to Port Said by sea and by land and one intermediate stopover in Alexandria, Egypt.

The quick turnaround time on the project is an excellent result for Drafinsub, and follows a successful operational phase, carried out in cooperation with Impresub. After pressure testing carried out under the supervision of third parties, the first part of the project took place with a saturation of 18 days, continued with another of 22 days and finished with a third one of 30 days.

Overall the project ended with 70 days of saturation (49 operational days and 21 of weather standby), with a total of 80 submersible decompression chamber (SDC) runs.

Raffaella is a saturation system designed for diving operation at a maximum depth of 200m and consists of a main saturation chamber, a transfer room divided into two compartments, a diving bell equipped to operate up to three divers and a hyperbaric rescue chamber (HRC).

The system is designed to work with four divers and to be easily installed on board diving support vessels, dynamic positionning vessels, or other small transportations such as pontoons. Raffaella is monitored and controlled by a saturation/diving control room, which constantly monitors the deep, inner room atmosphere, temperature, video communication and other parameters.

Raffaella has been designed using the most innovative solutions to create a competitive system for the oil and gas offshore market.