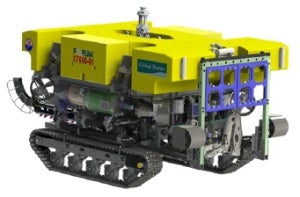 Global Marine Systems has announced the addition of a ForumTM XT 600 Trenching System to its subsea cable fleet. The XT600 is a purpose-built system that allows Global Marine to significantly enhance performance across the full range of subsea cable maintenance activities including trenching and survey tasks. The equipment is the latest evolution to the highly successful Triton series of subsea cable maintenance vehicles. It is supplied by Forum Energy Technologies.

The XT600 operates in both tracked and free-fly, and has a depth capability of 2000m. It has 600 horsepower (hp), delivering over 500hp to the jetting functions for more efficient subsea cable burial. The XT600 buries and de-trenches subsea cables up to three metres deep. It is designed with a light and compact frame, with a strength capability that allows operation in up to sea state six on the Beaufort scale.

The XT600 Trenching system will be installed on the Global Marine vessel Cable Retriever. It will be used exclusively for submarine cable repair and burial work for the South East Asia and Indian Ocean Cable Maintenance Agreement (SEAIOCMA). SEAIOCMA renewed submarine cable maintenance contracts with Global Marine in 2012, and the agreement is in effect through 2017.

Global Marine director of maintenance John Walters said: "This is a fantastic leap forward in terms of cable maintenance capability in Asia. The new XT600 allows our cable ships to offer better protection for submarine cables by burying them deeper and faster than before. The XT600 represents a major enhancement to the level of service we can provide to our SEAIOCMA customers, and demonstrates Global Marine’s on-going commitment to provide the optimum technical solution to our customers."

SEAIOCMA provides submarine cable maintenance spanning the Indian Ocean from an area between Djibouti in the west, Perth, Australia in the south, the US island of Guam in the east and the northern tip of Taiwan. The agreement provides for the repair and maintenance of subsea telecommunications cables in the event of cable damage by ship anchors, fishing, earthquakes and tsunamis. Ships based in Singapore, the Philippines and India are ready to respond within 24 hours in the event of a disruption to telecommunications traffic.