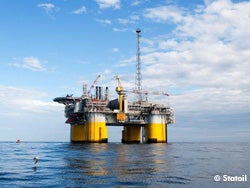 On behalf of Wintershall, Statoil has signed a contract with Nexans for the supply of direct electrical heating (DEH) technology. The DEH riser will connect the Kristin and Maria fields in the Norwegian Sea with the Kristin platform, ensuring the constant flow through pipelines.

DEH is a flow assurance method used on many pipelines. The method is based on controlling the temperature on the pipeline by passing electric current (AC) through the steel wall of the pipeline, thus preventing hydrate and wax formation. At a depth of more than 300m, the water is just above 0°C.

"The award of both of these contracts highlights Nexans’ expertise in subsea cables and direct electrical heating systems."

In addition, Nexans has been awarded a subcontract by FMC Technologies for a dynamic control umbilical system for the same project.

Executive vice-president hybrid underwater cables Krister Granlie said: "Nexans is pleased to be working with Statoil and Wintershall on this project. We are looking forward to continuing our long-standing relationship with Statoil."

Production of the DEH riser will start during autumn 2015, with delivery taking place during second quarter of 2016.