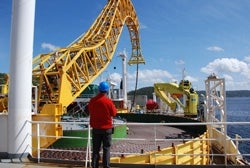 The cable will create a new 100MW power connection between Ibiza and Mallorca. At 119km it is the world’s longest three-phase XLPE submarine cable, weighing almost 7,000t. To carry and install the cable, Nexans’ own cable ship, the C/S Nexans Skagerrak, has received a major refit.

Red Eléctrica de España (REE), which operates the Spanish power system and owns the power grid, ordered the €90m cable link between Ibiza and Mallorca for the latest phase in a project to link the Balearic Islands to the mainland grid on the Iberian Peninsular. This will provide the islands with a more reliable, energy efficient and lower emission power supply.

The 119 km cable, designed, manufactured and installed by Nexans features state-of-the-art XLPE insulation. It will set two world records for both the longest three-core high-voltage (132kV) AC connection, and the deepest at 800m.

The cable was spooled from Nexans’ specialized submarine cable in Halden, Norway and over onto the vessel’s turntable to a height of 7m and a diameter of 29m. It is now heading for the Mediterranean where it will be installed ready for commissioning in 2015, according to the project schedule.

During one year of manufacturing, Nexans’ own high-voltage laboratory at Halden conducted almost 100 tests of various cable lengths and end samples. The cable design has also been tested to an output sufficient to provide 60,000 households with electricity, equivalent to twice the consumption of a small town.

The huge length of the cable made a number of the processes involved more demanding, as seemingly minor variations result in major fluctuations over a long continuous length.

"So far everything has run to schedule with the cable passing its final test, the factory acceptance test (FAT), and we are delighted to be starting the delivery and installation phase."