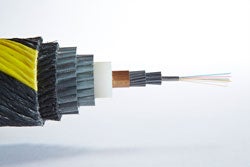 Nigeria and Cameroon are to receive a boost to internet connectivity after Nexans-delivered repeatered optical cables for the Nigeria-Cameroon Submarine Cable System (NCSCSC) in a contract with turnkey contractor, Huawei Marine Networks Co.Ltd. (Huawei Marine).

Nexans will supply approximately 1,100 km of the latest generation of Repeatered Optical Cables (ROC-2) and associated accessories for the project.

The Nigeria-Cameroon Submarine Cable System will deliver broadband to users in both countries by the end of 2015. The submarine cable system, which will be the first wholly owned by Cameroon, will have a capacity of 12.8Tbps.

Optical repeaters were integrated into the cables by Huawei Marine at Nexans’ facility in Rognan, Norway in a complex process which represents the start of a new era for Nexans submarine fibre solutions (SFS).

"Nexans has met the needs of our project by not only producing high-quality repeatered cable, but also providing dedicated support in the complex process of integrating the repeaters into the cable. The delivery of these cables is a key milestone in the NCSCS project," said Kevin Zhang, project director at Huawei Marine.

Krister Granlie, executive vice-president, hybrid underwater cables in Nexans, says: "After several successful partnerships with Huawei Marine, we are pleased to be working with the company again on the NCSCS project.

"Nexans fully satisfied the delivery time and quality requirements of the contract. The NCSCS project represents a key milestone for Nexans in entering the repeatered cable system market, and we look forward to continue collaborating with Huawei Marine in the future."

Delivery of the cables started in early 2015 and the project will be completed later this year.