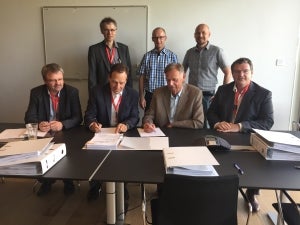 Denmark’s electricity grid is to be reinforced with more than 290km of Nexans’ XLPE cables as part of ENERGINET.DK’s JFK & Storstrømmen project. Nexans will supply two submarine cable systems and two underground cable systems in Denmark in a contract worth approximately €25m.

The JFK & Storstrømmen project is part of a Danish national initiative to move the majority of power cables underground by 2030. The Cable Action Plan will see 2,900km of new power lines installed as underground cables and replacement of 3,200km of existing 132kV and 150kV overhead lines.

Nexans and ENERGINET.DK previously collaborated on the Køge Bugt project, also part of the Cable Action Plan, and will start working to connect Kriegers Flak offshore wind farm to the Danish Grid thereafter.

ENERGINET.DK project manager Oddleif Nielsen said: "Having previously worked with Nexans, we know they have the technical skill to complete the contract and manage the project. We are looking forward to partnering with them again."

"Nexans is excited to be working on another project with ENERGINET.DK in Denmark. We are proud to be working together to not only improve the environment in Denmark, but also the energy security of the country," added Cyprien Federspiel, VP sales & marketing, land high-voltage at Nexans.

The cables will be manufactured at Nexans’ plants in Hanover, Germany, and Halden, Norway. Delivery will start in March 2016.