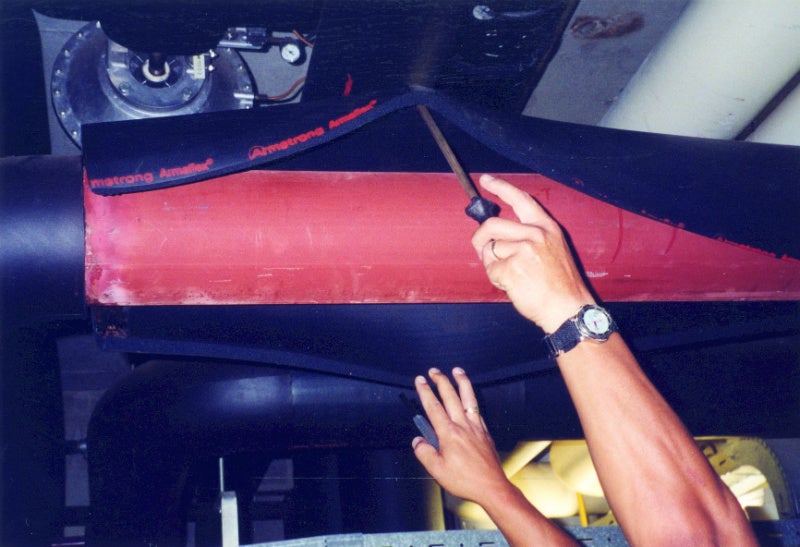 Even under the harshest offshore conditions closed-cell Armaflex significantly reduces the danger of corrosion thanks to its integrated water vapour barrier. The outcome of this test confirms the excellent results, which have been achieved with Armacell’s elastomeric insulation materials all over the world for decades.

Rust never sleeps, some 40% of the world’s steel production is needed to replace parts destroyed by rust. The World Corrosion Organization estimates that corrosion damage costs the global economy $2.2tn annually, that is 3% of the global gross domestic product. Some 45% of the costs, around $1tn, arise annually in the oil, gas and petrochemical industry. According to a study by the US American ExxonMobil Chemical Company, 40% to 60% of maintenance costs for pipework are due to CUI.

And here the indirect costs as a result of downtime have not even been considered. Experts in the mineral oil industry assume that CUI is the main reason for unscheduled plant shutdowns and responsible for more downtime than all other causes together. In extreme cases leakages as a result of corrosion can even lead to fires or explosions, thus endangering human life.

CUI is insidious: the processes occur hidden beneath the insulation and are often only discovered when extensive damage has already taken place. Insulation alone cannot safeguard plant components against corrosion, but appropriate insulation systems can effectively support corrosion protection. The choice of material decides whether the insulation minimises the risk of corrosion or favours corrosion processes.

Armaflex in the TNO-ENDURES CUI test

The influence of the insulation systems used on the CUI risk is now gradually being acknowledged in the oil and gas industry. However, while there are recognised standards and procedures for assessing the performance of anti-corrosive treatments, as yet hardly any international standards address the influence of insulation materials on the CUI risk. The test method to assess a range of insulation materials which was developed by TNO-Endures (Den Helder, the Netherlands) for Shell could provide a basis. This methodology is widely recognised by the oil and gas industry and is seen by many specialists as the potential precursor to an official international standard.

In the standardised test Armaflex insulation materials were subjected to a worst case scenario: an insulated, unalloyed steel pipe with a medium temperature of 80°C was continuously sprayed with warm saltwater. One half of the pipe was insulated with two layers of Armaflex sheets each 25mm thick (case A).

The other half of the pipe was prepared in the same way and then clad with a glass reinforced plastic (GRP) weather barrier (case B). To simulate a failure mode, in case A several holes were drilled through the entire insulation thickness. In the case B, on the other hand, the holes were only drilled in the cladding, the insulation remained undamaged. In both cases it was ensured that water could penetrate the insulation material. These artificial conditions, which are ideal for corrosion, were maintained for six months.

At the end of the test phase, the specimens were examined thoroughly. In case A corrosion had occurred as expected – however the processes were restricted to the immediate vicinity of the drill holes. There were no signs of corrosion in any other areas, including the entire underside of the pipe.

The saltwater had obviously not spread and reached these regions. Expectations were surpassed again in the second case, in which the holes had only been drilled in the cladding. While the outer insulation layer was damp to touch at the end of the test phase, the inner insulation layer was completely dry. No corrosion was detected on the steel pipe. The Armaflex insulation had prevented moisture reaching the surface of the pipe.

In terms of physics, this remarkable result can be put down to the built-in vapour barrier of the closed-cell insulation material. The test demonstrated impressively that Armaflex minimises CUI processes even under the harshest conditions. It must be emphasised again that the corrosion processes in this test were induced deliberately. Neither the ambient conditions nor the damage caused to the Armaflex material reflect real-life situations.

The CUI test confirms the excellent results, which have been achieved with Armaflex insulation materials throughout the world for decades. The closed-cell insulation material with low thermal conductivity and high-resistance to water-vapour transmission provides plant components with long-term protection against condensation and energy losses.

The highly flexible material fits snugly even around the most complex components and can be installed easily even under very difficult conditions on the building site. As is often noticed during maintenance work, plant insulated with Armaflex display no sign of corrosion even decades after its installation. Internal and external tests have shown that even after 20 years Armaflex still has the values guaranteed at the time of manufacture. To ensure a long service life of the insulation system, it is not only essential that the insulation thickness is calculated correctly and system-compatible accessories are used, but also that the materials are installed professionally following the manufacturers instructions.

Mitigation of Corrosion Under Insulation (CUI)

Armacell provides professional insulation and covering systems for marine, offshore, energy and heavy industries. For over 50 years Armeflex has been the leading brand of...