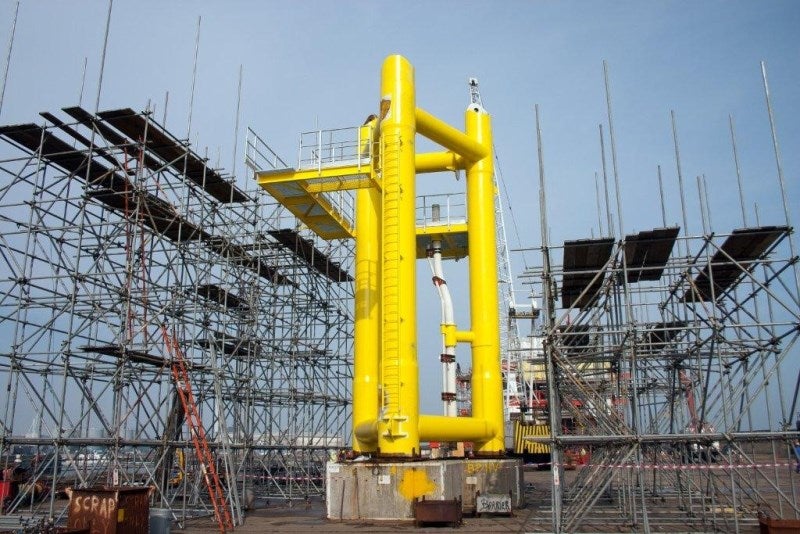 The offshore oil platform has been designed and constructed by SLP Engineering, the UK’s most experienced EP(I)C company.

SLP commissioned Gardwell Coatings to metal spray the structure, which will be erected in the North Sea oilfields later this year. Gardwell Coatings is one of the largest blasting companies in the UK, and was established to service the oil and gas industry.

The offshore platform is a three-leg tubular steel Jacket weighing around 436t, with the topsides weighing around 345t. The centre core of the jacket is 27.1m-long with three, 1m diameter main tubular columns.

The insides of the columns were TSA’d with 250-400 microns of aluminium, sealed with an epoxy sealer.

Around two thirds of the external surface of the columns, which will be in the splash zone and exposed to the harsh North Sea, were TSA’d to the same thickness, sealed with epoxy sealer and top coated with a PU topcoat.

In addition, a number of stainless steel parts and riser pipes have also been TSA’d and sealed. In total, around 450m2 of the centre core has been TSA’d.

The top section and the platform’s support braces were also TSA’d, sealed and top coated with PU, totalling another 500m2.

Once the centre core and top section were welded together, the weld joints were also TSA’d, sealed and top coated to complete the task and ensure all sections have been protected.

Gardwell Coatings recently purchased an additional three MK73 systems with long supplies packs. With the longer supplies pack, up to 50m from the gas bottles to the pistol, the operators have the flexibility to freely move around the large jacket structure without moving the gas supplies, greatly increasing productivity.

The team generally used five pistols on the job at any one time and sprayed an average of around 100m2 of TSA a day. Given the complexity of the job, which included the internal coating of the 1m diameter tubular sections, this production rate is quite an achievement.

Prior to metal spraying the platform surfaces, each section was grit blasted overnight ready to be sprayed during the day. The spraying chamber was maintained at a controlled temperature with up to 2.2 million BTU of heating available to ensure optimum quality of the coating.

By applying Thermal Spray Aluminium the platform has a predicted life to first maintenance in excess of 20 years, even in the harsh environment that is the North Sea oilfields.

Gardwell Coatings operations manager Chris Green said: "Metallisation offers good product support and the equipment has allowed us to deliver a higher than anticipated production rate, which is pretty good considering the complexity of the job.

"The efficiency of the MK73 has allowed us to exceed the expectations of our customer SLP for the coating timescales. Overall I’m pleased with the outcome of this project."

Metallisation’s MK73 Flamespray pistol represents a breakthrough in anti-corrosion spraying. With a choice of continuous or stop / start nozzles and a combination of the spray head, pilot assembly and a high power air motor drive, it is the fastest and most reliable system in existence.

The MK73 system is also fitted with a spreader attachment to the spray head. This spreader assists the operator to produce a more evenly distributed coating, which improves efficiency and reduces the potential for touch-up reworks to be done.

Metal spraying involves the projection of small molten particles onto a blast prepared surface. Upon contact, the particles flatten onto the surface, freeze and mechanically bond, firstly onto the blasted substrate and then onto each other, as the coating thickness is increased.

To create the molten particles, a heat source, a spray material and an atomisation/projection method are required.

In the Flamespray process a wire is fed by a driven roller system through the centre of an oxygen-fuel gas flame where it is melted. An annular air nozzle then applies a jet of high-pressure air, which atomises and projects the molten material, in this case aluminium, onto the platform’s surface.

Typical bond strengths for flame sprayed aluminium are around 5-7MPa, although with careful preparation and quality spraying procedures, this figure can be exceeded.

Metal Spray Supplies is a specialist provider of metallisation and other coating solutions, able to offer expert assistance and advice regarding a comprehensive array of...