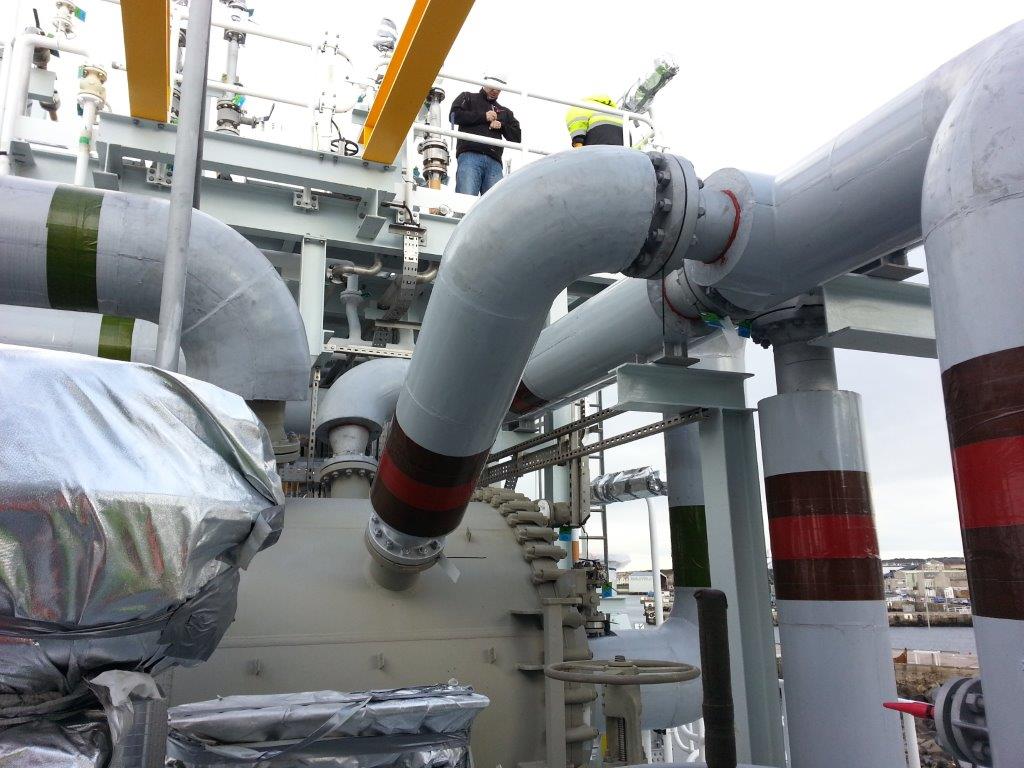 The Emphasis and focus is now on this stage of the project as the plant strives towards completion and the imminent arrival of the gas from the Laggan-Tormore field. The field is located approximately 125km north-west of the Shetland Islands and represents the future of the UK oil and gas industry. The field will provide 17% of the UK’s gas reserves. This gas ‘will power our future in the UK’, according to TOTAL.

Petrofac had the enormous task of building the mammoth complex in a harsh weather environment that can change four times a day in warmer seasons. The logistical elements of constructing one of the UK’s most valuable assets were a significant challenge. This project is the largest individual building program in the UK since the London Olympics.

Their option to utilise the FOAMGLAS® insulation – Terostat system on selected process pipework and equipment was the best choice. With an environment very similar to the UK North Sea, a good weatherproof insulation system was required, which would aid in reducing CUI, reduce labour costs and install times and be easily maintained, as part of a plant fabric maintenance programme, once the plant begins operating. TOTAL and Petrofac saw the direct benefits of using the FOAMGLAS® insulation Terostat system for this application.

One of the attributes Pittsburgh Corning offered TOTAL during the FEED stages of the project was a dedicated insulation Industry team located in Dubai. They were able to address the day to day needs of Petrofac Sharjah’s design engineers and oversee installation of the FOAMGLAS® insulation – Terostat system during the Construction phases of the PAU’s (Preassembled Units) in the Gulf Emirate.

This huge Global Supply Chain Project saw PAU’s being fabricated in the UAE, pipework and vessels insulated with FOAMGLAS® insulation – Terostat and leave their yard in the UAE to begin their long sea journey to the Shetland Gas Plant.

These pre-assembled units formed part of 27 quality modules fabricated in the UAE by more than 1,500 personnel working from two yards. The UAE project, which was finished in only 11 months, was completed safely and on schedule.

The FOAMGLAS® insulation – Terostat system was completed to the highest standards prior to arriving in the UK. Once arriving at Shetland, all PAU’s were joined together to make up the working parts of the Shetland Gas Plant. This was a combination of the units and pipe racks which process the LagganTormore Gas.

Some of the PAU’s were fabricated in Scotland with the FOAMGLAS® insulation – Terostat system being applied by a local insulation contractor. These modules were constructed jointly at Forsyth’s, Buckie prior to their relatively short sea journey to the Shetland Isles.

Over the course of the project, 100 units have been shipped to the job site from the UAE and Kuwait. Now continues the final task of the further tie-ins and completion of the FOAMGLAS® insulation – Terostat system with Pittsburg Corning playing a part in powering the future.