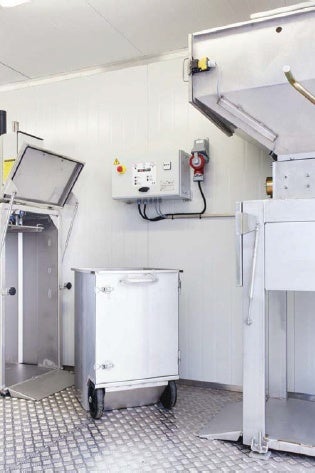 This highly flattering profile by David Porteous featured in the latest issue of Inside Marine.

Delitek AS is one of the world’s leading manufacturers of waste-handling systems specially designed for use on board ships and offshore installations. Owners and operators across the globe rely on the Norwegian company’s technology to dispose of their waste in an environmentally responsible manner and in compliance with the latest regulations.

The very first waste-handling system Delitek AS manufactured 20 years ago is still its best-selling model today. The medium-sized DT-500MC, like other products in the company’s DNV-approved Greenship range, consists of a shredder as well as a compactor. Delitek director of sales and marketing Mor ten Larsen explains: "By first shredding and then compacting, extreme reductions in waste volumes can be achieved. Used in isolation, a compactor will generally achieve around 70 per cent volume reduction.
But if a shredder and compactor are combined within the same system, volume reductions of 90% are possible with most solid waste materials.

"If ship owners can minimise waste volumes by 90%, then they can
minimise their waste-management costs by 90% too. This means it takes just a few weeks after buying one of our waste handling systems for our customers to see a return on their investment."

Delitek’s systems, which can also incorporate glass crushers and balers, are made of stainless steel, making them suitable for indoor or outdoor use on vessels and offshore rigs and platforms. They offer compaction forces of up to 15t and feature wheeled, interchangeable containers making for easy segregation of consumer waste in accordance with industry standards. The company’s smallest compactor is able to pass through loading hatches measuring 600mm wide by 400mm high, making for easy interior installation and avoiding the drastic step of cutting a hole in a ship’s structure.

Delitek’s products are manufactured by its wholly-owned subsidiary Delitek Production AS, which operates from a modern factory (opened in January 2010) adjoining Delitek’s headquarters in Alsvåg in northern Norway.

"Even our main competitor does not have their own factory – they outsource," said Mr Larsen. "Having in-house production facilities gives us full control over the design and manufacturing process and enables us to customise products and react quickly and flexibly to specific requests. We have the capability to deliver products more-or-less immediately after receiving an order, while many of our rivals operate on turnaround times of between four and eight weeks. Our products are also of the highest quality and this is another of our unique selling points. It is not our intention to try and compete with low-cost manufacturers in Asia on price."

Delitek was established in 1992 after the founding owner heard a radio programme about how long it takes waste thrown overboard from ships to dissolve (up to 450 years in the case of a plastic bottle) and decided to do something about it. The firm’s prototype waste compactor was trialled on a fishing vessel and the first production models were supplied to rigs operating on the Norwegian
Continental Shelf. In its early years the company found it difficult to persuade vessel owners to invest in onboard waste-handling systems, but this gradually changed with growing concerns about the effects of marine pollution and the introduction of increasingly stringent environmental regulations.

"A major breakthrough came when we signed a framework agreement with Teekay Shipping in 2003," added Mr Larsen. "We took off after that and expanded the product range. All the arrows have pointed upwards ever since and we have doubled our turnover every year over the last five years."

Today Delitek is recognised as one of the world’s top three suppliers of marine-waste-management equipment and its products are marketed and distributed via a global network of agents. It serves seven segments within the sector; marine, offshore, navy, cruise, yacht, fishing and onshore; and secures most of its orders from offshore customers. Delitek is an approved supplier to the Central and Northern European offshore sector through its Achilles JQS and Connexio memberships. Cruise ships are an emerging market which Delitek believes has great potential to grow after it formed partnerships with Scanship, from Norway, and Evac, from Finland, to design and manufacture food waste management systems suitable for smaller passenger vessels.

In co-operation with another of its technology partners, the German firm MOE GmbH, Delitek has developed a new containerised
waste-management station designed to enable owners and operators to comply with new MARPOL regulations in effect since 1 January. The new rules prohibit all vessels of 400 gross tonnage and above and all vessels certified to carry 15 or more persons from simply throwing their waste over the side except in certain circumstances.

The MORTIM concept, which was unveiled at SMM 2012 in Hamburg, is a practical solution where there is no space available inside ships for waste handling or storage and the cost of retrofitting a system is impractical and/or prohibitive. Each container, which can operate from anywhere on a ship’s deck, houses compactors, shredders and glass crushers, as well as additional equipment such as oil filters and oil can crushers.

"The MORTIM system will make it easy for new and existing OSVs and other specialist vessels which generate large amounts of solid waste to comply with the regulations," said Mr Larsen. "Each system will be custom made and fitted with bespoke equipment needed to treat, store and dispose of waste to suit individual operational requirements. It seems we have introduced this product to the market at just the right time because we are receiving a growing number of enquiries."