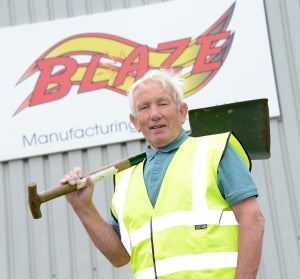 Blaze Manufacturing Solutions, based in Laurencekirk, UK, held a special event recently to mark the retirement of one of its longest serving members of staff, William Foster.

Mr Foster, 80, joined the specialist firm soon after it was established in 2006, as a part-time facilities technician following a 43-year career as a telephone engineer. In his role at Blaze, he was responsible for overseeing the maintenance of the company’s HQ and grounds in the Laurencekirk Business Park.

Blaze, was founded by Mr Foster’s daughter, Ann, and her husband Howard Johnson, to design and supply fire protection systems and loss prevention services for oil and gas operators.

During his time at the company, Mr Foster has witnessed a number of changes. The specialist firm has experienced rapid growth over the years, continuing to secure contracts with major names in the industry, resulting in a 500% growth in turnover since 2012 to £19m this financial year.

Since its establishment, Blaze has also opened an engineering office in Kemnay, near Inverurie, along with a regional office in Great Yarmouth, and a southern sales office in Milton Keynes.

To meet demand from clients, the company’s workforce has grown to 32 full-time members of staff, including design and engineering teams, procurement, and business support personnel, and 67 contractors.

To mark his retirement, football fan Mr Foster was presented with Manchester United match ticket, a corporate day at Brechin Football Club with two work colleagues, and a cake.

Finance director at Blaze Manufacturing Solutions, Ann Johnson, said: "When my parents moved from Manchester to be with us, Dad was keen to continue working and he started his role at Blaze. He actually came out of retirement to manage the refurbishment of our old facility on the outskirts of Stonehaven before we moved in as we were struggling to do the work on the building and concentrate on the business. He then helped with the refurbishment at Blaze House before we moved in 2014.

"He has been a dedicated member of the team and has played an integral part in ensuring the building and its grounds have been kept immaculate at all times. He is loved by all of our staff and will be sorely missed."

Mr Foster said: "I really enjoyed working with the team at Blaze. There have been a number of changes during my time with the company, and being able to watch its continued success has been highly enjoyable.

"I have certainly met some interesting characters over the years, and they definitely helped to keep me feeling young at heart."

Blaze, which won the Business Success Under Three Years accolade in the 2014 Grampian Awards For Business Excellence, is a finalist in two categories of the Elevator Awards 2015.