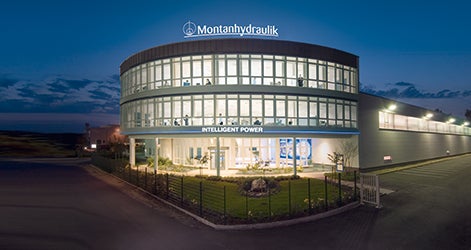 The Montanhydraulik Group is one of the top companies in the world when it comes to hydraulic cylinders and hydraulic systems. What began as a small company more than 50 years ago has now grown to an international group of companies operating worldwide under the slogan ‘Intelligent Power’.

Montanhydraulik was involved in the development of hydraulically operated telescopic cranes right from the start, resulting in the company actively participating in all new developments over the course of almost 30 years. Countless patents for two and three-stage telescopic cylinders and hydraulic controls have been Montanhydraulik’s reward for this effort. The patents form the basis for the company’s position as market leader in the manufacture of hydraulic systems, both in the German and international mobile crane sectors.

The experience gained in the mobile crane construction sector are beneficial in other industrial segments also. The expertise on hydraulic system applications gathered over 60 years can now be found in the most diverse range of machines and facilities. Montanhydraulik specialises in the production of high-tech hydraulic cylinders. Its product portfolio includes differential, telescopic and synchronised cylinders, as well as rotary actuators, piston accumulators and counter-balance stop valves.

This success led to the founding of further production centers, including an independent company for repair and service and the establishment of Montanhydraulik India. Additional growth was achieved by the partial acquisitions of Agop Oleoidraulica in Italy and Muns Techniek in the Netherlands as well as the takeovers of Maschinenfabrik Glückauf in Gelsenkirchen and Harry à Wengen in Neubulach.

Montanhydraulik’s Indian subsidiary produces hydraulic power units such as electric and electronic control systems used in the construction of dams. Hydraulic cylinders, electric controls and complex switchboards are designed, produced and subjected to thorough inspection. In addition to its engineering and production operations, Montanhydraulik India also works on sites all over the world installing and commissioning complete hydraulic and electric drive systems that operate the gates of sluices and dams.

Strategic cooperation with the Dutch company Muns Techniek has made it possible for Montanhydraulik to considerably extend its know-how in the offshore sector. The internationally operating company specialises in the development and manufacture of hydraulic installations and controls, as well as wet dredge mining and general ship construction. In past years, Muns Techniek impressed primarily with outstanding solutions for offshore applications such as jack-up platforms and construction ships.

Experience gained over more than a century with products that have to remain functional under even the harshest conditions make Glückauf one of the leading manufacturers in the mining sector today. In addition to developing individual solutions, the repair of Glückauf machines and machines by other manufacturers forms a substantial part of the company’s production.

Agop, based in Spilamberto in Italy, produces cylinders and rotary actuators for use in various application areas. The company also manufactures and installs complete systems in a range of other fields, including offshore. In many cases, Agop develops completely new systems from scratch to suit customer requirements. Some results of this development work include automated control systems for the position and trim of ships or other special features.

This subsidiary of Montanhydraulik based in Dortmund is a reliable partner providing maintenance and repair services. It has the know-how, flexibility and production-specific equipment that make extensive repairs to exact customer specifications possible in record time. To this end, the company has a production space of 6,300m² complete with assembly and testing stations at its disposal. What’s more, its service technicians can work on behalf of its customers anywhere in the world.

The complexity and dynamics of continuously changing markets, products and general conditions are the type...

The joint venture of Montanhydraulik and Dutch subsidiary Muns Techniek in the offshore sector has...

Offshore Technology made by Montanhydraulik Group

As a hydraulics specialist with a long-standing reputation for supplying solutions for mobile cranes, harbour...

Setting More in Motion Together

The structure of Montanhydraulik Group gives us the freedom to be able to serve our...