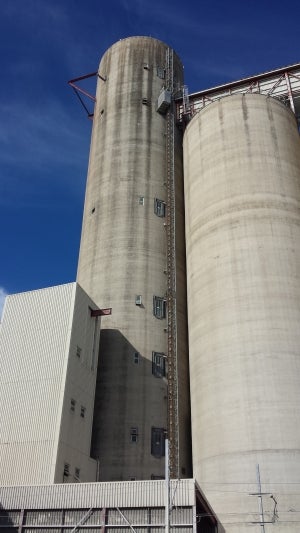 In 1986, an Alimak rack and pinion elevator was installed on GrainCorp’s Gladstone facility, providing access to critical machinery atop the 70m grain stack. After 28 years of operation, Alimak Hek has completed a mast replacement and gearbox overhaul to extend the elevator life.

Founded in 1916, GrainCorp operate seven bulk grain export terminals throughout Australia. With a combined grain storage capacity of 20 million tonnes, the company is listed as Australia’s largest agribusiness, processing up to 30% of the country’s bulk grain exports.

In 1986, an Alimak Scando 10/19 rack and pinion elevator was installed on the facility, providing access to seven levels of the terminal’s 70m grain stack. Used daily for the routine inspection and maintenance of the grain stack’s critical conveyor belt machinery, the elevator has remained in use at the Gladstone grain terminal for more than 28 years.

During this time, Alimak Hek has provided ongoing scheduled servicing and maintenance of the elevator, completing two minor refurbishments to extend equipment life: a partial mast replacement in 2012 and a gearbox overhaul and electrical re-circuiting in 2014.

Following an on-site service inspection in early 2012, Alimak Hek technicians identified irreparable corrosive damage to the elevator’s base mast, base frame and mast sections, located 25m up the grain terminal stack. Damaged beyond repair, these compromised sections demanded replacement. This required the 70m mast and base frame to be dismantled, the corroded sections replaced and the entire mast re-assembled and installed on the grain stack.

Due to the close proximity of power lines to the grain stack, a crane could not be angled close enough to facilitate the dismantling of the mast. Without the use of a crane, it would be impossible to lift mast sections over the cables, thereby clearing the power lines. A temporary disconnection of the power and removal of the cabling would result in a shutdown of GrainCorp’s entire Queensland rail system.

In order to replace the damaged mast, Alimak Hek engineered a unique winch that would allow the mast to be dismantled and reassembled manually. Fixed to the roof of the Alimak elevator car, the winch could hook each section individually and lower the section onto the elevator car roof area.

"Alimak technicians were then able to use the elevator itself to deliver each mast section safely to the ground, without interference with the power lines."

Alimak technicians were then able to use the elevator itself to deliver each mast section safely to the ground, without interference with the power lines. Using this winching technique, each of the grain stack’s 49 mast sections were manually dismantled and removed, with the same procedure used in reverse to re-assemble the mast.

In May 2014, Alimak Hek completed a second minor refurbishment on the GrainCorp elevator, with an electrical system re-circuiting and gearbox overhaul. Originally installed with landing gates on each level of the seven-storey grain stack, the elevator was re-circuited by Alimak technicians to bypass intermediate levels, travelling uninterrupted from ground floor to level six. With the grain conveyor belt system located on the sixth level, the elevator will now provide direct access from ground floor to critical machinery.

During scheduled quarterly servicing of the grain stack elevator, Alimak service technicians identified pitting of the gearbox worm wheel teeth and drive shaft. Installed as the original gearbox in 1986, the wear and corrosion of the two components was the result of 28 years of accumulated elevator operation.

"A replacement gearbox worm wheel and drive shaft were sourced direct from the Alimak Hek factory in Skelleftea, Sweden."

A replacement gearbox worm wheel and drive shaft were sourced direct from the Alimak Hek factory in Skelleftea, Sweden. As genuine Alimak OEM parts, the replacement gearbox and drive shaft were manufactured to the exacting specifications of the original gearbox, purpose-built for GrainCorp’s Alimak Scando 10/19 elevator. Following a gearbox rebuild in Alimak Hek’s Brisbane workshop, the refurbished gearbox and driveshaft were installed on-site at the Gladstone grain terminal in May 2014.

Since its installation in 1986, the GrainCorp Alimak elevator has delivered more than 28 years of reliable service, providing daily maintenance access to critical machinery atop the 70 m grain terminal stack.