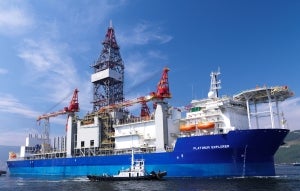 Liebherr offshore cranes set a historical record in terms of annual deliveries, supplying as many cranes a year as never before.

"Our distinctly increasing turnover figures wouldn’t be possible without our new production site in Rostock, Germany, as well as our worldwide sales and service network. We are all working together as a team, always close to the customer to meet new needs before they arise. Our success proves that Liebherr offshore cranes are on the right track, despite the challenging economic environment," said Wolfgang Kueng, sales director for Liebherr offshore cranes.

BOS and MTC series most successful

The BOS-series had already been the most successful offshore crane type in the Liebherr offshore product portfolio in 2012 and 2013. In 2014, the number of supplied units was even doubled, compared with 2012. With 38 units delivered, BOS is the most demanded offshore model series and continues its striking success.

The BOS 4200 had a significant impact on this positive development as customers opted for 22 cranes of this type. This model impresses with a maximum capacity of 150t and a boom length between 33m to 72m. Used in the oil and gas industry, for heavy lift construction, as well as wind plant installation, Liebherr BOS series are designed for outstanding versatility. The BOS series is characterised as a reliable state-of-the art slewing bearing offshore crane with rope luffing system and lattice boom.

Through the new ram luffing knuckle boom series RL-K Liebherr extends its range of offshore cranes and offers its customers a convenient solution for general purpose but also subsea operations as well as pipe- and riser handling.

With the RL-K 7500 Liebherr offers an innovative active heave compensation concept for subsea applications up to 3660m below water level. The crane can be rated both as general purpose offshore crane and as heavy lift crane, being able to hoist loads weighing up to 300t. It can thus be installed on board drill ships and also on pipe lay vessels.

The RL-K 4200 is next to general purpose operation mainly used for pipe and riser handling on drill ships. The crane prime mover is either electric or diesel hydraulic. With a maximum capacity of 100t and a radius of up to 54m, the RL-K 4200 covers a wide field of applications.

The ram luffing knuckle-boom crans opened up new market segments for Liebherr in the offshore sector. Steadily growing sales figures confirm that the RL-K is developing in the right direction. One vital advantage of the crane’s knuckle boom is that loads can be lowered to the water surface with a short rope length between crane boom head and water line. Furthermore, the crane is equipped with a number of advanced hydraulic, electric and electronic features and functions, some of which were submitted for patent by Liebherr, for example, Heavetronic system (AHC).

Throughout the world, Liebherr offshore cranes and their innovative features are sought after on a very high level. For that reason, Liebherr is optimistic that 2015 will be a good year for its offshore cranes.

Liebherr offshore cranes are modern, sophisticated machines that benefit from the experience gained during many years of design, development and operation in the most severe...