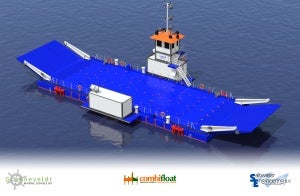 VINCI Construction started the construction work in Panama early this year and needed a rapid solution to transport construction materials and vehicles to complete the bridge by 2015. Combifloat was able to offer the quickest, most flexible and economical solution according to the requirements and client’s project-specific configuration. Another important factor in winning the contract was the ability to reuse the modular Combifloat® pontoons after project completion for a variety of other applications by the client.

The ferry, named ‘Concepción’, consists of ten modular Combifloat C-7 series pontoons with a total length of 48m, a width of 12m and a deck load capacity of 150t. In order to allow a beach landing of the ferry in the shallow water banks of the Panama Canal, two 160kW built-in Ballegooijen bow thrusters have been positioned in the pontoons on each side of the ferry. This resulted in the necessary maximum allowable draft of only 80cm, maintaining excellent manoeuvrability of the ferry.

The Concepción has been built according to Bureau Veritas (BV) classification rules and regulations. The vessel was disassembled in Moerdijk for sea transport to Panama in early December. Due to the simple Combifloat coupling and locking system, the ferry can be quickly assembled in less than 10 days after arrival. It is expected that the Concepción will be fully operational by early January.

Combifloat managing director Bas de Jong said: "This contract award demonstrates the flexibility and versatility of Combifloat modular pontoons. Completing this project from concept to delivery in only ten weeks is a major accomplishment of everyone involved. Due to the excellent performance of our subcontractor, Groeneveldt Marine Construction and Saltwater Engineering in Papendrecht, we were able to overcome the challenges accompanied by a fast-track project like this. This successful project execution will create future business opportunities for Combifloat, as this modular concept can be adapted for a wide variety of applications. We are proud to be able to deliver a high-quality product in such a very short period."

The Atlantic Bridge will be located 3km north of the Panama Gatun locks, near the city of Colon. It will be the world’s longest cable-stayed concrete bridge at 1,050m long with a central span of 530m. The bridge will be the canal’s third lane expansion and will serve as the only road connection across the waterway on the north side of the Isthmus.

Picture: Artist impression of the Concepción enroute to Moerdijk for transport to Panama. Image: courtesy of Combifloat.