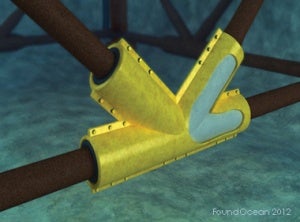 FoundOcean has significantly grown its services for the repair and strengthening of offshore structures.

Jim Bell, managing director of FoundOcean said, "Maintenance is an essential part of ensuring the longevity of an offshore structure. FoundOcean has a strong track record in providing inspection, repair and maintenance (IRM) services. These cost-effective upgrade and reinforcement solutions can be used to remedy damage or extend a structure’s design life."

The company is scheduled to complete five IRM contracts in quarters three and four of this year. Four of these projects are for grouted repair clamps to restore structural integrity, and the fifth will rectify movements in a platform by addressing seabed scour. Because repairs take place in live platform environments, special air-driven batch mixing equipment is used to comply with hazardous zone two regulations.

The first platform processes oil and associated gas from several fields. The platform’s firewater caisson is corroding. It will be repaired by fitting two grouted clamps connected by four new structural members around the caisson. An ordinary Portland cement and seawater mix will be injected into the annulus for structural integrity.

The second platform to be repaired is located off the north-east coast of the Shetland Islands. This platform is also suffering from a corroded caisson. The caisson will be fitted with a grouted clamp over the damaged areas. Once the grout plug is set, FoundOcean will continue to fill the rest of the clamp / caisson annulus. The clamp has been designed with bolt-together sections and is equipped with primary and secondary grout inlets. It will then be attached to an adjacent brace member by a stressed mechanical clamp to restrict lateral movement.

The third platform receives and processes oil and gas from a number of fields in the North Sea. A four-sleeve repair clamp has been installed on the drill cuttings caisson of the jacket. FoundOcean grouted sleeves one, three and four in 2007, leaving sleeve two which could not be completed before the end of the planned maintenance period. A bladder will be inserted into the caisson and inflated, ensuring grout does not enter the caisson when grouting commences.

A grout plug will be set at the bottom of the clamp; grout will then be injected into the annulus between the clamp and the caisson using a stinger until good grout returns are seen exiting the outlet.

FoundOcean’s fourth platform repair is located 312km east of Dundee, Scotland. The jacket will be fitted with two stressed clamp configurations. The first is an ‘X-Node’ clamp assembly and the second a ‘K-Node’ clamp assembly. Each configuration is made up of bolt-together sections which are equipped with primary and secondary grout connections. FoundOcean will grout the annuli between the clamps and the members to ensure structural integrity. FoundOcean will use CEM I type 52.5 Ferrocrete cement to achieve a specific gravity of 1.98.

The fifth platform of the season is located in the southern North Sea and stands in 24m of water. Localised scour has eroded the seabed from under the platform leg mudmats and is putting excess pressure on the crown shim welded leg-to-pile connections at the top of the legs. This is causing movement in the platform which may eventually lead to a reduced platform life.

The movement will be stopped by rectifying the scour and strengthening the leg-to-pile connection with grout. Donut-shaped grout bags will be placed around and under the circumference of each mudmat. The bags will be filled to form a seal between the underside of the mudmat and the seabed.