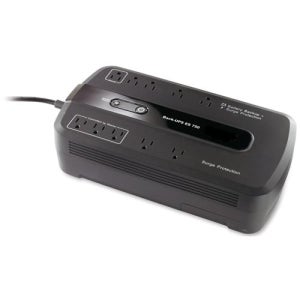 Be safe on-board; Shipboard power is different from household power, its neutral is ungrounded and needs a dual pole circuit-breaker to protect sailors from shock. Use on naval applications, cruise ships, oil spars or yachts. Use as a surge suppressor for PC, printer and monitor or TV. And it keeps that PC running during those power transfers.

The 120VAC shipboard ready UPS for shipboard delta power (protects both legs of input power) at an affordable price. All units can be optioned with a high-temperature (122°F) battery pack with eight-year to ten-year life. Multiple surge suppressor outlets come standard.

All three have a USB port that is used for Powerchute© monitoring software and shutdown. All three come with 6ft power cord, USB cable and Powerchute software. Windows knows these UPS via USB. All are battery-backed UPS design. Powerstar offers quick delivery too. Powerstar manufactures in the US.

The PS502-550G 330W New. This unit may be ordered with a rugged metal outer chassis. The PS502-550MC. The PS502-550g UPS specially built for Shipboard Delta power applications comes standard in a high-impact heavy plastic outer, and has a total of 8ea. NEMA 5-15 outlets; four-surge suppression only, and four more outlets with surge suppression and UPS backup. 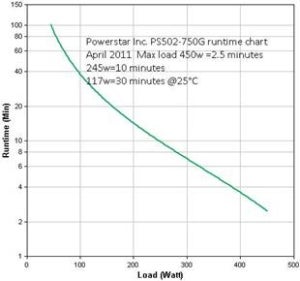 The PS502-650G1 390W this UPS has a total of eight, NEMA 5-15 outlets. Four outlets with surge suppression only and four outlets with surge suppression and UPS back-up. This UPS has 390W of stepped sine wave output power. The PS502-650 comes with a 108VAhr battery pack unit. It will run 4.2min at full load (390W). It is protected with a surge energy rating of 365J and full-time multi-pole noise filtering, 5% IEEE surge let-through and zero clamping response. It also contains F connector feed through and RJ45 feed through connectors to protect a coaxial line, a data line or phone line from surges. Operating range is between 0°C and 40°C. The weight is 14.3lb. The UPS size is 3.46in x 7.09in x 11.89in.

The PS502-750 450W This ‘master control’ UPS has a total of 10ea NEMA 5-15 outlets. Five outlets have surge suppression only and five outlets with surge suppression and UPS back up. Three of the UPS backed up outlets turn off when your connected PC goes into a hibernate state. The UPS monitors the reduced current flow of the MASTER port. This is called MASTER CONTROL. So peripherals such as, monitors and printers will be powered down when the PC powers down.

All units listed are modified for shipboard duty by Powerstar Inc in the US. Ruggedisation for shock and vibration is available on request.