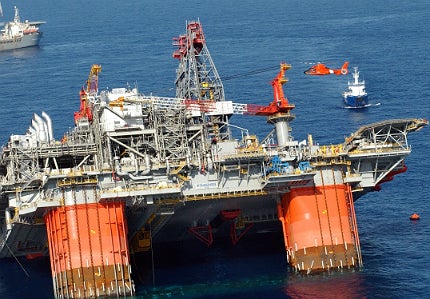 Extreme weather is an unavoidable risk in many areas of the offshore oil and gas industry, especially for platforms and drillships working in meteorologically unpredictable regions such as the US East Coast and the Gulf of Mexico, which are lashed by hurricanes and other powerful storms during the Atlantic hurricane season between June and November every year.

Understandably, tracking and predicting the routes and severity of extreme weather systems has been a point of focus for both government agencies and oil and gas majors. Last month the US Energy Information Administration introduced an interactive map layering offshore platform locations on to real-time storm data from the National Hurricane Center, to help industry and analysts deal with the hurricane season.

Weather specialists are also employed by offshore operators to provide industry-specific weather services in rough regions. Houston-based Wilkens Weather Technologies, a unit of ROCKWELL COLLINS, is one of those specialists, its 25 meteorologists using a wide range of data sources to advise on whether to continue operations or evacuate.

Wilkens’ weather support manager Mark Walquist provides a more detailed picture of how random acts of nature can be made a little less random.

Chris Lo: In your view, does the offshore industry have an effective approach to predicting extreme weather events?

"We’ve seen a quantum leap in the accuracy of forecast models over the past couple of decades."

Mark Walquist: I think that most operators offshore are very well attuned to the weather as it impacts their operations on a daily basis. Each operator has different criteria for how they respond to a severe weather event, depending upon the kind of operation and where it is located.

As an example, clients in equatorial areas such as West Africa never have to prepare for tropical storms or hurricanes since they do not occur in that region. However, they do experience strong squall lines that develop over the interior portions of the continent that can be very damaging when they move offshore.

In areas where tropical activity is a concern, it is important that the client is aware not only of existing storms, but also areas that have the potential for storm development in their immediate vicinity.

Each company has different stages of demobilising their platform or moving their boat to safe shelter when it comes to tropical activity. In concert with our clients, we have developed web-based tools that allow them to make these decisions in a precise and confident manner. Once the storm has passed, each of these companies has a plan for mobilisation that is dependent upon the weather.

CL: What are the best methods of predicting hurricanes and their potential effects on offshore O&G infrastructure?

MW: Like all private and public weather forecast entities, we rely upon a number of forecast models to make our predictions. Knowledge of the strengths and weaknesses of each of these models for various scenarios is critical in predicting the track and intensity of the storm.

"We’ve been spared for the past three seasons; it’s possible the law of averages will catch up with us this year."

We have seen a quantum leap in the accuracy of the forecast models over the past couple of decades and I think that there will continue to be improvement in the coming years. However, it will still be necessary for meteorologists to rely upon their experience and knowledge of the models, to produce an accurate forecast since the models do occasionally stray significantly from one model run to the next.

As far as the effects on the infrastructure offshore, I’m not qualified to answer that question. In general though, I believe that the waves generated by the storm are much more destructive than the winds to the offshore infrastructure. Therefore, a large slow moving storm may have the potential to cause more damage than a smaller scale storm that actually has higher winds.

Surge and wave action along a coastline can also have quite a negative impact, generating multiple "landslides" on the seafloor. In many cases, these landslides have destroyed miles of subsea oil and gas pipelines, disrupting production for extended periods. Pipeline operators use the forecasts to their advantage and shut down lines that have the potential for failure during a storm passage, minimising any environmental impact.

CL: To what extent does extreme weather prediction and preparedness improve outcomes when a major storm hits a platform?

"The squalls that move offshore can arrive without much warning."

MW: I know that I keep coming back to the West Africa example, but it is germane to your question. Operators offshore Nigeria, Cameroon and Equatorial Guinea, for example, have very little weather data to rely upon. The national meteorological services in these countries do not have the infrastructure in place to issue weather warnings such as we see in the United States.

In many of the airports, we will only get observations when a flight is scheduled to land, so there is a definite lack of data with which to perform an analysis.

The squalls that move offshore can arrive without much warning and if they are in the middle of a sensitive operation, it can be very costly if they get interrupted by the weather. We constantly monitor satellite imagery to assess the strength and movement of the storms. We try to provide at least a three-hour lead time, so they can either delay the operation or secure things onboard to minimise the risk to people and equipment.

CL: On major offshore projects with multiple contractors, do you think conflicting weather information from different sources can cause problems?

MW: Many operators subscribe to multiple weather forecast entities as they see it as insurance that they won’t be caught unaware of an impending event. Most forecast companies are looking at the same data; however, the forecasts are going to vary to some degree, based on the expertise of their staff and the amount of intervention and interpretation by a meteorologist. In tranquil conditions this approach may be acceptable, but when the weather is more unsettled, this approach will likely fail.

We encounter situations where a contractor receives a different forecast than a subcontractor, creating a conflict about ‘work or no work’ decisions. When this happens, Wilkens Weather is always available to explain our reasoning to our clients so that they can make an informed decision.

CL: Wilkens sent meteorologists to the Sakhalin project to work onboard lead vessels – is this a common practice for your other offshore clients, and what are the advantages of having an on-site meteorologist?

MW: The need for a meteorologist to work onboard is really dictated by the scope of the project and its sensitivity to the elements. We were asked to provide meteorologists to work on this project because of problems related to conflicting forecasts that various contractors were getting. In the previous year, this led to a number of delays, as some of the contractors fled to safe harbor for a storm that never materialised, based on the forecasts that they were getting. We were asked to come aboard last year and be the definitive voice as to what all of the contractors and subcontractors would utilise in the day to day planning activities.

We actually had four different projects that required our meteorologists to provide on-site consultation last year. Beside Sakhalin Island, we also had forecasters on projects in the Gulf of Mexico, Bay of Campeche and offshore southern Vietnam.

There are many advantages of having a meteorologist onboard. The primary advantage is the direct communication that the forecaster has with the people utilising the forecast and the trust that is developed on both sides. When our people are on site, they gain a real appreciation for how critically the weather impacts our clients’ operations.

As I mentioned previously, getting good quality observational data is so important in our business and having the forecaster onboard constantly monitoring the weather is a huge advantage. Being on site allows the forecaster to quickly learn the nuances of the local microclimate and incorporate that into their forecasting.

CL: What is your opinion of the 2013 Atlantic hurricane season?

MW: Forecasting the number of storms in a given season for the Atlantic Basin is relevant information to have, but it doesn’t really tell you which parts of the basin will be affected or how significant the storms will be in a given area. Several very significant storms have hit the northern Gulf in the past decade that did a great deal of damage both offshore and onshore, but we’ve been spared for the past three seasons.

It’s possible that the law of averages will catch up with us this year. I think that the offshore industry does a very good job of getting their people out of harm’s way. The forces exerted upon the offshore structures during a hurricane are tremendous, but I’m confident that the industry will continue to innovate and find ways to minimise the effects of these storms.