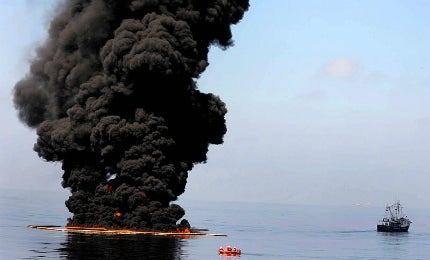 US energy company ExxonMobil started €125m ($160m) worth of planned drilling activity at the beginning of the month on two prospects at the Dunquin licence area in the Porcupine Basin, 200km offshore of Ireland.

ExxonMobil is planning to drill test wells during a four-month period.

Earlier data suggested the presence of nearly 300 million barrels of oil and 8.5 trillion cubic feet of gas between the two Dunquin prospects.

BP lodged an appeal against a court ruling regarding a settlement for the 2010 Deepwater Horizon disaster that will force the company to pay out billions of dollars more than it had anticipated.

On 3 April, the company filed the notice with the US Court of Appeals in New Orleans, relating to US District Judge Barbier’s order to uphold decisions made by administrators of BP’s $8.5bn settlement.

In a one-page filing, BP said that the appeal is "timely" under federal rules, as it was lodged within 30 days of Barbier’s order, reported Bloomberg.

US-based offshore drilling contractor Vantage Drilling took legal action against a BP Plc unit, on the grounds that it had to pay an excess of $265.5m in financing costs in relation to the 2010 Gulf of Mexico oil spill.

Vantage claims it had to find last-minute alternative funding for its Platinum Explorer deepwater drilling rig, which was close to completion at a South Korean shipyard, following the blowout of BP’s Macondo well, reported Bloomberg.

The company said the subsequent massive oil spill shutdown much of the Gulf in April 2010.

Myanmar’s Government commenced an auction of 30 offshore oil and gas exploration blocks, which is anticipated to attract huge interest from foreign multinational companies.

Successful bidders will be granted full rights for up to three of the 19 deepwater blocks on offer. Energy firms must submit their bids by the 14 June, reported the AFP.

Previously, companies were required to explore onshore blocks in partnership with state oil companies, but bidders are now expected to take full control for deepwater exploration, owing to the high cost and technical skills required for such operations and programmes.

Florida became the fourth American state to file a legal case against BP and cement contractor Halliburton in relation to the Deepwater Horizon disaster and the subsequent oil spill in 2010.

The 40-page complaint was filed by Florida Attorney General Pam Bondi in the US District Court in Panama City on 20 April, which marked the third anniversary of the tragedy that killed 11 people.

Florida’s move follows immediately after Mississippi filed a suit against BP on 19 April, joining Alabama and Louisiana, which are part of a federal trial in New Orleans against BP and its contractors, reported The Associated Press.

The Norwegian Government on 21 April gave the go-ahead for an impact study on an environmentally-sensitive area in the Arctic region, taking a step closer towards opening up the area for oil and gas exploration.

Drilling activities in the waters around the Lofoten Islands, just above the Arctic Circle, have been prohibited as they are home to the world’s richest cod stocks and any kind of development faces stiff opposition from environmental groups and the tourism industry.

However, the ruling Labour Party voted in favour of the study, which is normally carried out before any exploration, and said it might take another vote in 2015 before actual drilling could commence, reported Reuters.

US announces sale of 21m acres of oil and gas, offshore Texas

The US Department of the Interior announced it will offer more than 21 million acres at a lease sale for oil and gas exploration and development, offshore of Texas.

The proposed Lease Sale 233, which is expected to take place in New Orleans in August 2013, will be the third offshore auction under the Obama administration’s Outer Continental Shelf Oil and Gas Leasing Program for 2012-2017.

The Interior said the latest sale will include all available unleased areas in the Western Gulf of Mexico Planning Area.

Shell’s Arctic drilling programme is completely suspended for 2013, negligence is denied at the BP and Transocean Deepwater Horizon trial, while Total is given the green-light to restart the Elgin field in the North Sea.

BP and Transocean faced US prosecutors in court who alleged the companies’ negligence contributed to the 2010 Deepwater Horizon explosion, the UK North Sea hit a 30 year investment high, while Rosneft and ExxonMobil decided to expand their Russian Arctic shelf joint venture.

Centrica to Acquire Oil and Gas Assets in Norway North Sea from Statoil for $1,625m - Move to Strengthen Centrica’s Upstream Operations in the North Sea

BP to Acquire 9.5% Stake in Rosneft: Strategic Move by the Companies to Further Explore the Arctic Region