A sea of iron rigs sit idly in the Gulf of Mexico. With not a vessel floating by or an oil worker in sight, these platforms appear to be abandoned, but they are not alone.

Beneath the surface, schools of rockfish, garibaldi and angel fish swim between the risers that are themselves encrusted with coral, sponge, algae, sea urchins, crabs and snails. Like castles in an aquarium, disused platforms are sprawling with underwater residents. But, these creatures shouldn’t make themselves too comfortable, for their habitats may soon be demolished.

Of the 650 idle relics in the Gulf of Mexico, around 158 are set to be removed in 2012, a process which will almost certainly wipe out a huge proportion of the marine population. Oil and gas companies have the option to avoid this situation by partially removing or towing their rigs in place under artificial reefs programmes offered across all coastal US areas.

So why are so many of these firms, and indeed policy makers, choosing to ignore this lifeline? 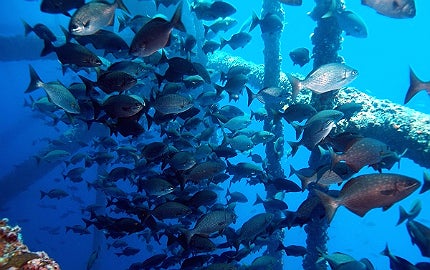 Thirty years after it was built and just months after it was abandoned, the High Island 389-A rig will be removed under plans put forward by the US Department of Interior. The department cites concerns about the potential for spills from this well, located within the 56-square mile Flower Garden Banks National Marine Sanctuary.

Critics may find it ironic then that this same department, led by Ken Salazar, wants to blast the High Island structure with explosives, killing thousands of fish and damaging delicate seafloor ecologies in the process. 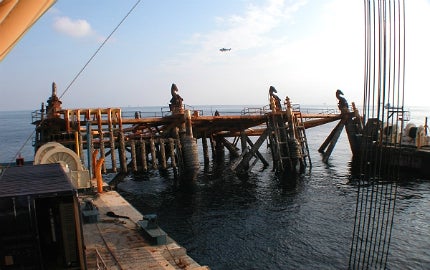 Shell decommissioned Eugene Island 331A (pictured) and removed its steel jacket to create an artificial reef in 2009. Courtesy of Louisiana Department of Wildlife and Fisheries

According to not-for-profit corporation EcoRigs, the Gulf of Mexico will lose a third of its 3,600 offshore oil and gas platforms in the next five years, which will destroy an estimated 1,875 acres of coral reef habitat and seven billion invertebrates. But, several actions are underway to ensure that removal is just an option and that artificial reefing will become a more popular course of action. 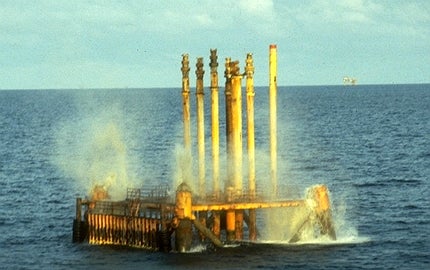 Explosive removals are estimated to kill 800 fish. Courtesy of Louisiana Department of Wildlife and Fisheries

An alternative to platform removal is to convert it into a reef through the Rigs-to-Reef (RTR) programme developed by the former Minerals Management Service, now the Bureau of Safety and Environmental Enforcement (BSEE).

Reefing involves one of three methods, including ‘tow in place’, where the structure is severed from the sea floor and moved into a state-approved location. 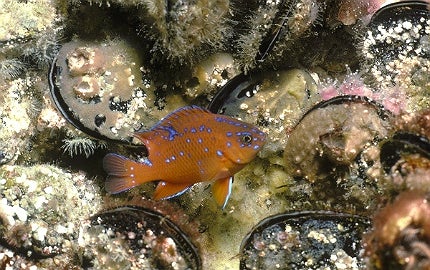 Many disused platforms in the GoM are home to Garibaldi fish. Courtesy of Bob Wohlers / Lovelab

Partial removal is also an option, which involves removing the top portion of the submerged platform and either placing it on to the sea floor or towing it to another site. The third option, ‘toppling’, involves explosives to sever the base of the structure below the mud line.

EcoRigs argues, however, that toppling an offshore platform over as an artificial reef does not prevent the mortality of most protected marine invertebrates.

Campaigns to save dormant oil rigs 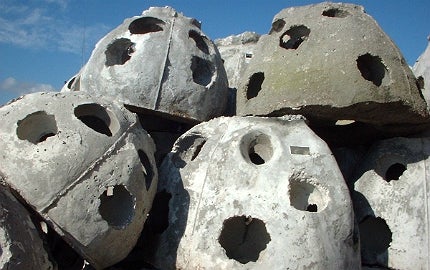 These artificial reef balls were dropped around oil platforms in Lake Pontchartrain to promote fish growth. Courtesy of Nathan Arthur

In its ‘Platform Removal Brief’ issued in July 2011, EcoRigs urges the Bureau of Ocean Energy Management, Regulation and Enforcement (BOEMRE) to consider alternate uses for retired platforms, such as sustainable fisheries and production of renewable ocean energy.

The organisation argues that evaluating these options could lead to platform preservation and avoid the destruction of the ecosystem and inhabitants. 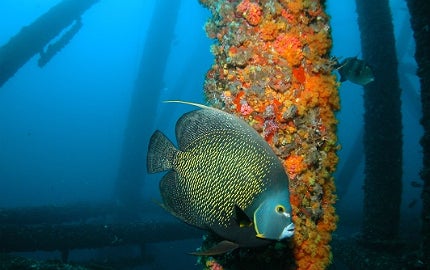 The federal government is bound by environmental laws to protect coral reef organisms and reef communities. Courtesy of Louisiana Department of Wildlife and Fisheries

EcoRigs hopes to encourage the enactment of environmental laws to prevent the removal of disused oil rigs. These laws, which federal agencies are bound by to protect marine life, include the 1996 Sustainable Fisheries Act – an amendment to the Magnuson-Stevens Fishery Conservation and Management Act – which requires the National Oceanic and Atmospheric Administration to protect essential fish habitats (EFH). The government is also obligated under the National Environmental Policy Act to consider the environmental impacts of removing and blasting dormant oil and gas platforms. 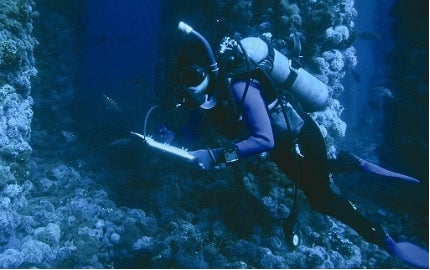 Divers periodically stop at rigs which have turned into lush ecosystems. Courtesy of JamesForte / Lovelab

Currently, the Gulf of Mexico Fishery Management Council is seeking to recognise offshore platforms in the area as EFHs, which will bring into play the Sustainable Fisheries Act. The governor of Texas Rick Perry, along with state fisheries managers and sport-fishing groups, has asked the Department of Interior to re-evaluate the current rules which give owners of nonproducing platforms one to five years to remove them, depending on where they are located.

They are seeking at least a delay in implementing outright removals and the amendment of the 2012 Farm Bill to help conserve marine wildlife residing on or around these structures. 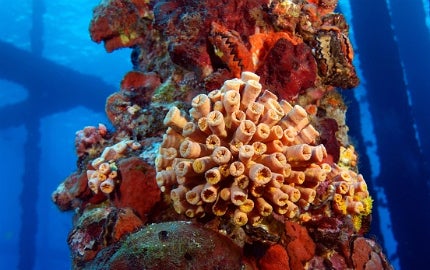 If platforms are left in place, operators would accrue environmental compliance expenses, as they often scrape off thousands of marine invertebrates during routine maintenance. Courtesy of Andy Burlingham / Black Dog Divers

But, there are no assurances that any structure deemed as an EFH will be turned into an artificial reef, as the offshore operator who owns the structure must make the final decision. If the operator decides not to convert the rig, BOEMRE regulation must then dictate that the structure is removed. 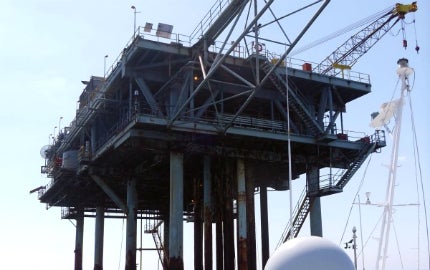 Platform owners are responsible for their rigs from construction to removal. Courtesy of Andy Burlingham / Black Dog Divers

So why do many oil and gas companies choose not to participate in Rigs-to-Reefs programmes? One would think that offshore operators would want to save on removal, transportation, salvage and recycle costs.

The problem is oil and gas regulations state that the original owner of the platform is liable for that structure until it is removed. This would mean owners would need to take care of day to day maintenance and any accidents and insurance if the platform is left in place. 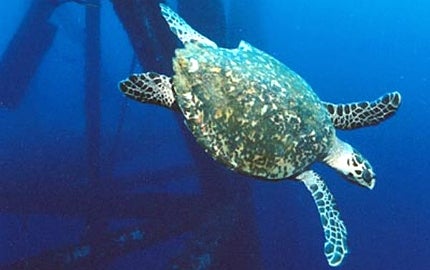 Many marine creatures vanish after oil companies opt out of maintaining their dormant platforms. Courtesy of Louisiana Department of Wildlife and Fisheries

The main concern US federal agencies have with keeping dormant rigs in place is that the cost of environmental compliance associated with producing oil will increase. If EFH and Nepa environmental laws are applied to the oil and gas industry, operators would have to pay for compliance expenses when they perform routine maintenance.

According to EcoRigs, the "cradle to grave" liability issue is responsible for the destruction of thousands of acres of coral reef habitat and the mortality of billions of protected marine organisms.

Louisiana Department of Wildlife and Fisheries