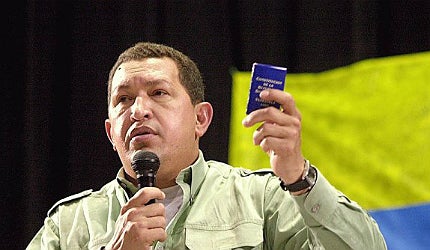 They say a change is as good as a rest, but with the late socialist leader Hugo Chávez’s chosen successor Nicolás Maduro now in charge and investors shunning Venezuelan debt on Monday, the country’s weakening oil sector could be set to crash and burn.

Last month, Maduro – then an acting president – said Chávez had "left ready the industrial and petroleum development of the nation," which will be boosted through the continuation of a 21st century Bolivarian Revolution, a movement that has seen the implementation of a new constitution and the nationalisation of the key sectors.

It seems, like his predecessor, Maduro is intent on promoting socialist reforms in the country, where poverty is stamped out through higher wages, free healthcare and cut-price housing, but foreign investment in oil, which Venezuela relies on for 95% of its exports and 45% of its federal budget revenues, is curbed.

"It seems, like his predecessor, Maduro is intent on promoting socialist reforms in the country."

Just two days in office and Maduro, who won a narrow victory in Venezuela’s presidential election on Sunday, has faced fierce criticism from his opponents.

The official count indicates that the 50-year old socialist won 50.7% of the votes against business rival Henrique Capriles’ 49.1%. But Capriles has refused to accept the result and called for a recount and peaceful demonstrations.

During his campaign, Maduro gained sympathy from his followers by playing a video of Chávez, filmed shortly before his death, giving him his blessing in an emotional speech to the OPEC, and later claimed his "father’s" spirit had visited him in the form of a "little bird." He also threatened his political enemies with a curse if they failed to vote for him.

Few could deny Maduro’s ability to manipulate, but this skill will only take him so far. Now he must aid the recovery of a financial crisis in Venezuela, triggered by a lack of foreign investment and an obsession with oppressing North American influence on the region.

"Few could deny Maduro’s ability to manipulate, but this skill will only take him so far."

Venezuela is often described as an oil-rich country due to its proven reserves, which amount to around 100 billion barrels. But the term seems ironic in this case, as oil production in the country has declined by roughly a quarter since Chávez took office in 1999.

The late president nationalised the oil industry to claim a 60% stake in all oil projects around Venezuela, a decision which led major investors, including ConocoPhillips and ExxonMobil, to leave on bad terms.

Chávez could also be accused of hurting Venezuela’s relations with the US – for which it relies on for 40% of its exports – by forging alliances such as the Community of Latin American and Caribbean States and the Union of South American Nations, and reaching out to far-out countries such as China and Russia, not to mention calling former US president George Bush "the devil" in a speech at the United Nations in 2006.

Speaking one day after Bush addressed the same session of the General Assembly, Chávez announced: "The devil came here yesterday, and it smells of sulfur still today, this table that I am now standing in front of. Yesterday, ladies and gentlemen, from this rostrum, the President of the United States, the gentleman to whom I refer as the devil, came here, talking as if he owned the world."

"Venezuela is often described as an oil-rich country due to its proven reserves, which amount to around 100 billion barrels."

It seems Maduro is following in Chávez’s footsteps in terms of pushing certain policies, and behaving erratically.

In the months leading up to the election, the acting president expelled two attachés from the US embassy for searching for active military personnel in Venezuela to propose destabilising projects from with the Bolivarian National Armed Forces, and accused foreign enemies of "causing" Chavez’s cancer. He also labelled the domestic opposition "fascists" who want to divide the country.

In April, Maduro claimed former United States Ambassador to Venezuela Otto Reich and US diplomat Roger Noriega were plotting to kill him, in order to prevent his victory in the election.

Speaking in a television interview, Maduro said the plot also involved "right-wing forces" from El Salvador, which had already sent paid assassins to Venezuela. El Salvador president Mauricio Funes had refused in 2009 to incorporate his country into the Bolivarian Alliance or 21st century socialism that was promoted by Chavez.

"Their goal is to kill me," said Maduro. "They want to kill me because they know they cannot win free and fair elections."

Maduro sees Chávez as his "mentor," and that doesn’t bode well for the oil industry and Venezuela’s economy as a whole. No one knows what Maduro plans to do with the oil market, but all signs suggest that he will preserve the current system, ignoring Venezuela’s impending energy problem and deepening financial crisis.

Brazil’s long-awaited 11th round of oil exploration auctions – the first since 2008 – is set to grip the industry in 2013.

The Perla gas field is situated in the Cardon IV block in the Gulf of Venezuela.