Expand
The Bacchus oil field is connected to the Forties Alpha platform, located approximately 100 miles east of Aberdeen, via a four-mile subsea bundled pipeline.
Rowan Gorilla VII jackup rig, owned and managed by Rowan Companies, is being used for the development drilling of the Bacchus production wells.
The Bacchus oil field is located in Licence Block 22/6a in the UK central North Sea area. 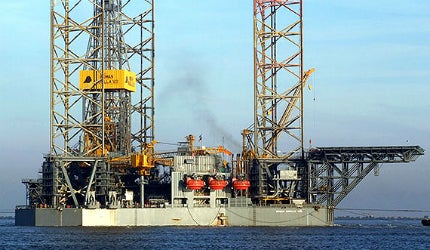 Bacchus oil field is located approximately 116 miles north-east of Aberdeen, in Licence Block 22/6a within the UK’s central North Sea area. It was put into production in April 2012 through the first production well.

Apache North Sea, a UK subsidiary of the American independent oil and gas company Apache Corporation, operates and holds a 70% working interest in the Bacchus development. The remaining 30% interest is held by Endeavour International.

“The bundle was tied back to Forties Alpha platform in August 2011. Forties Alpha is a fixed platform built for the Forties oil field operated by Apache.”

Nevertheless, a revised cellular model applied after re-mapping the structure showed the presence of stock tank oil originally in place at 104 million barrels of oil.

The life of the Bacchus oil field is anticipated to be 15 years. The field is estimated to produce 18 million barrels of oil per day and 5.7 million cubic feet of gas each day at full production.

The field development plan (FDP) for the Bacchus oil field was sanctioned by the UK Department of Energy and Climate Control (DECC) in June 2010. The approved scheme called for the drilling of three production wells and a water injection well, as well as the transfer of fluids to the Apache operated Forties Alpha platform via a four-mile subsea bundled pipeline.

The Rowan Gorilla VII jack-up rig was brought to the location in the second half of 2011 to commence development drilling on the production wells. Drilling on the first well was completed in January 2012 and it was put into production three months later. It flowed at the rate of 6,000 barrels of oil per day at the time of commissioning. As of August 2012, the well was producing 4,400 barrels of oil per day.

The field is now producing at the rate of 12,900 barrels of oil per day. Development of the third well is planned for 2013.

The water injection well, with a water injection capacity of 18,000 barrels of oil per day, will be used to supply reservoir pressure towards the end of one-year of initial production phase. More wells could be drilled to maximise fluid recovery.

The pipeline bundle system was established using controlled depth tow methodology (CDTM). Both ends of the pipeline are integrated with towhead fabrications weighing 190t and 106t. An acoustic monitoring system was employed to determine the exact positioning of both the bundle ends.

The production pipeline is tied-in to the production platform through a riser caisson measuring approximately 1,220mm in diameter and weighing 149t.

Subsea 7 was awarded a $75m contract in April 2010 to provide engineering, procurement, construction, installation and commissioning of the pipeline bundle.

Engineering work was completed at Subsea 7’s office at Aberdeenshire in Scotland. The pipeline bundle was manufactured at the company’s bundle fabrication factory in Wick, northern Scotland.