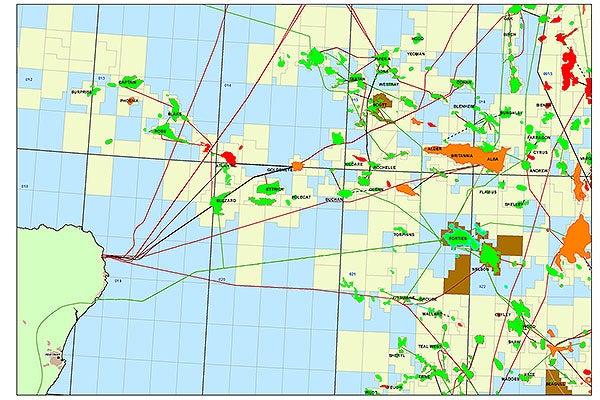 The Forties oil field, located 110 miles (177km) offshore Aberdeen within the UK production block 21/10 at a water depth of 106m, is considered to be the oldest and the biggest oil field in the UK North Sea.

The offshore oil field, brought on stream in 1975, produced more than 41,000 barrels of oil per day becoming the UK’s second biggest oil field by production in 2013. The field has become mature and is undergoing further development to extend its operational life beyond 2030.

“The field has become mature and is undergoing further development to extend its operational life beyond 2030.”

Forties is currently operated by Apache North Sea which holds 97.14% interest in the field. Other stakeholders in the field include Esso Exploration and Production UK (2.61%) and Shell UK (0.25%).

Discovery and development of Forties field

The Forties field was discovered in 1970 by BP which operated the field until 2003. Five appraisal wells were drilled at a depth of 2,130m in Block 21/10 of the UK Continental Shelf following the discovery.

The field was initially spread over 93km2 and involved the installation of four fixed steel platforms. It was brought into production in September 1975 and oil output peaked at 520,000 barrels per day in 1978 after a gradual decline was witnessed. A fifth platform was added to the field in 1985 and commenced production in 1987.

Apache acquired 97% working interest in Forties from BP, becoming the operator of the Forties field in 2003. The oil field had produced more than two billion barrels of oil by this time and its remaining recoverable proved oil reserves were estimated at 144 million barrels.

“The proven oil reserves of Forties as of 2011 were estimated at 174million barrels.”

The proven oil reserves of Forties as of 2011 were estimated at 174million barrels. The decommissioning of Forties field was earlier anticipated to start in 2013, but the life of the field has now been extended by 20 years.

Forties Charlie platform acts as the central hub and gathering platform for all production at the field. The oil from the platform is exported through a 36-inch export pipeline connected to Cruden Bay via the Forties Unity Riser Platform owned by BP.

The Alpha, Charlie and Delta platforms host both separation and processing facilities. The Bravo platform was converted into a direct export facility for non-stabilised produced fluid. The Echo platform does not include any separation facilities.

Production from the North Sea field

The Forties field produced 41,704 barrels of oil and 10million cubic feet of associated gas per day during the year ending in November 2013. It was the second highest producing field in the UK, after the Buzzard field.

Forties is expected to offer an additional production capacity of about 25,000 barrels of oil per day with the new Forties Alpha satellite platform scheduled to come on-stream by mid-2014.

The Forties Alpha Satellite Platform (FASP) is located adjacent to the main Alpha platform at water depths of about 110m and will offer 18 new drilling slots. Construction of the FASP started in 2010 and its commissioning was 99% complete by the end of 2013.

The FASP structure weighing about 17,000t features a four-pile jacket and deck. The structure is connected to the existing Forties Alpha platform by a 90m bridge. The new facility will provide additional liquids processing and gas compression capacity to the Forties Alpha.

OGN was awarded a £400m ($665.28m) contract to design and build the FASP platform in 2010. The jacket installation at the satellite platform was completed in September 2012. The platform construction was completed by May 2013.

KANFA Aragon was awarded a contract by OGN in April 2011 to deliver the Triethylene Glycol (TEG)-based dehydration module for the FASP.