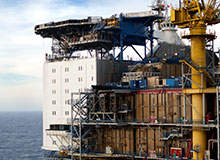 Delta 2 is a small field developed near the Oseberg oil and gas field located around 130km west of Bergen, Norway, in the northern part of the Norwegian North Sea. Delta 2 is developed as a satellite to the Oseberg field.

The plan for the development and operation of the Delta 2 field was submitted to the Norwegian Ministry of Petroleum and Energy in May 2013. The investment for the Delta 2 development was Nkr7bn ($1.2bn approximately). The oil field started production in February 2015.

The Delta 2 oil and gas field in the Oseberg South area was discovered in 2008. The exploration well 30/9-21S was drilled by Transocean Winner. The field was estimated to contain approximately 16m barrels of recoverable oil equivalents.

The Delta 2 reservoir consists of middle Jurassic sandstones of the Brent Group. It is located 3,100m beneath the seabed.

The field is estimated to contain 77 million barrels of oil equivalent (BOE), 32 million BOE of oil and 45 million of gas.

Delta 2 is developed at a water depth of 100m. The field development is based on the use of two seabed templates. The production of the field is sent to the Oseberg Field Centre via two insulated rigid pipelines.

The subsea equipment is installed as part of the Delta 2 development project include five wellheads, five subsea trees, and two subsea manifolds.

The Oseberg A concrete base platform is a process and accommodation facility. The Oseberg B steel jacket platform features drilling, production and injection equipments. Oseberg D is a steel platform with gas processing and an export facility.

Oil and gas from a range of fields, including Oseberg Øst, Oseberg Sør, Tune, Oseberg Vestflanke, and Oseberg Delta is processed at the field centre facilities.

Oil and gas transport from Oseberg and Delta 2

Oil from the Oseberg field is transported to the Sture terminal through the Oseberg Transport System. The gas produced from the field is sent to market via the Oseberg Gas Transport pipeline and into the Statpipe and Vesterled systems via the Heimdal Gas Centre.

FMC Technologies was awarded a $152m contract in December 2012 to supply the subsea equipment, including manifolds, wellheads, trees, and control systems for the Delta 2 project.

Profab
Profab is a recognised leader in the fabrication industry, with...