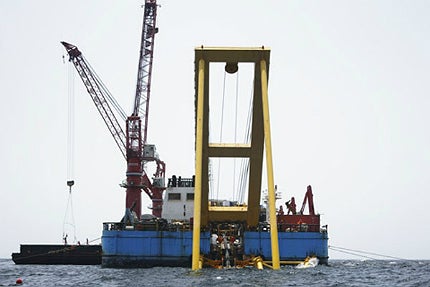 Hengam oil and gas field lies 70km off Iranian shores near the Hormoz Straight in the Persian Gulf. The field is situated approximately 40km south of Qeshm Island and 30km away from Hengam Island.

The oil and gas field, covering an area of 288km², straddles the sea border between Iran and Oman, with about 80% of the oil field lying in the Iranian territory. The jointly owned offshore field is administered by National Iranian Offshore Oil Company (NIOOC).

Hengam was brought on stream towards the end of 2010. The field has been undergoing continuous expansion since then.

It is estimated to contain 700 million barrels of oil and two trillion cubic feet of gas.

The oil and gas field was discovered in 1972 by the French oil ELF (now, Total).

"The oil and gas field, covering an area of 288km², straddles the sea border between Iran and Oman."

Appraisal drilling of the offshore field started in 2005 by Petroiran Development Company, a subsidiary of NIOOC. The drilling rig Fortuna was leased by Petroiran for a period of six months.

The drilling of the second Hengam well was completed in 2006 and the reservoir studies carried-out subsequently confirmed the in-place oil and gas reserves of 700 million barrels and two trillion cubic feet respectively at Hengam.

The agreement for the joint development of the field was signed between Iran and Oman in May 2007.

The first phase of field development was achieved in just 18 months. Test production from Hengam started in April 2010 with an output of 4,000 barrels per day (bpd). The field’s early production started in September 2010, with a daily output of 10,000 barrels of light crude oil. The field’s production was boosted from 22,000 bpd to 30,000 bpd with the completion of fifth well drilling, as of July 2013.

Hengam is operated with two platforms. Two additional jackets for wellhead platforms have been ordered for installation at the field.

"The field is situated approximately 40km south of Qeshm Island and 30km away from Hengam Island."

The oil produced from the field is sent via pipeline to Qeshm Island separation and refinery facilities with a design capacity up to 100,000bpd, and then to the Bandar Abbas refinery.

A gas processing plant is also being developed at Bandar Abbas in two phases for processing Hengam gas.

Hengam oil and gas will be conveyed conjointly through the 70km long, 16-inch diameter pipeline linking the Hengam field with Bandar Abbas. About 30km of the pipeline from passes below the seabed.

The pipe laying operations for the first phase of the field development were completed in May 2008 with the use of domestically manufactured PLB 132 Pipe Laying Barge.

The field’s first jacket with four legs and 1,100t of weight was successfully installed in the next month. The HL 5000 crane barge was used for the Hengam jacket installation.

A total of ten production wells are due to be drilled in the field.

NIOOC is also pursuing a plan for producing 80 million cubic feet (mcf) of gas a day from Hengam, which can also be extended up to 160mcf a day in future.

Naft Sazeh Qeshm (NSQ) has been awarded a contract for Engineering, Procurement, Construction and Installation (EPCI) of jackets for the two new wellhead platforms at Hengam field.

SAFF-ROSEMOND is providing engineering services to NSQ for the project.

Jamm Design & Development Company has been subcontracted by SAFF-ROSEMOND for the conceptual and detail design, as well as the installation engineering for the expansion project.

Kish Gas Field, located below Kish Island in Persian Gulf, Iran, has been under development since 2012.