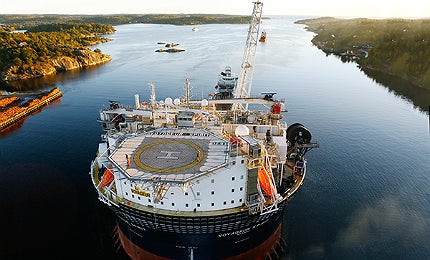 Huntington is a light oil field located in Block 22/14b in the United Kingdom’s central North Sea area. The project is covered by Production License P1114. It is situated approximately 205km east of Aberdeen, at a water depth of about 91m (298.5ft). First oil from Huntington was produced in April 2013.

E.ON E&P UK, an upstream oil and gas company owned by E.ON, operates the Huntington oil field with a working interest of 25%.

Premier Oil, Noreco and Iona Energy Canada are non-operating partners in the Huntington license. Their working interests in the project are 40%, 20% and 15% respectively.

The total investment on the project has reached more than £325m (approximately $526m).

The Huntington field was discovered by Oilexco (acquired by Premier Oil in 2009) in June 2007 by the discovery well 22/14b-5. The discovery well was drilled to a total depth of 4,061m in the Triassic Skagerrak Formation in the central North Sea. It encountered oil in two separate zones through a single bore.

“E.ON E&P UK operates the Huntington oil field, with a working interest of 25%.”

The first phases of appraisal drilling of the Forties and Fulmar sands were completed in December 2007 and February 2008 respectively. At the end of the programme, at least 137.7m of oil column was identified in the Fulmar zone.

A field development plan (FDP) for the Huntington project was submitted to the UK Department of Energy and Climate Control (DECC) in the first half of 2010. It was approved in November of the same year.

The field produces from four production wells and two water injection wells. All the wells are tied back to a floating production, storage and offloading (FPSO) vessel named Sevan Voyageur (or Voyageur Spirit) FPSO, via a subsea manifold. The vessel, which was upgraded at Nymo fabrication yard in Norway to handle 30,000 barrels of oil each day, reached the Huntington site in early October 2012.

The produced oil is stabilised and stored in integrated tanks of the FPSO. Shuttle tankers then transport the oil to market. The produced water is injected back into the reservoir to maintain pressure.

The natural gas is transmitted to an onshore terminal through the central area transmission system (CATS) pipeline system which runs from the central North Sea to Teesside, England. The CATS is a 404km (251 mile) long gas pipeline which can handle more than 48 million cubic metres of gas per day.

Development drilling on Huntington began in April 2011 and finished in July 2012.

In May 2010, E.ON entered into an agreement with Sevan Marine to lease Sevan Voyageur for a fixed period of five years. The agreement also includes options for extension. The deal between the two parties was finalised in October 2010, worth an estimated contract value of $535m.

“In May 2010, E.ON entered into an agreement with Sevan Marine to lease Sevan Voyageur for a fixed period of five years.”

Sevan Marine sold its Sevan Voyageur FPSO to Teekay Petrojarl in 2012 due to financial issues. The agreed sales price of the vessel was $540m.

In August 2010, Xodus Group was given a contract worth about $1.9m to provide front end engineering design (FEED) and detailed designs for the subsea structures. The company was also selected to provide delivery management services with respect to flexible risers, flow lines and bend stiffener connection systems as part of a separate contract.

Subsea 7 was contracted in March 2011 to carry out engineering and installation work. The scope of the contract included installation of an 8in gas export pipeline measuring 12km in length, infield flexible flow lines, umbilicals, associated risers and subsea structures. Tie-ins, pre-commissioning and system testing were also performed by the same company.

In May 2011, AGR Drilling Services was contracted to supply a riserless mud recovery (RMR) system for drilling of multiple wells in Block 22/14b.

Operations and maintenance services for the FPSO are being provided by Wood Group under a five-year contract. In addition, E.ON and Clariant Oil Services signed an agreement in November 2012 for the provision of management services for the Huntington project.

Islay Offshore Gas and Condensate Field, North Sea, UK
Islay is a gas and condensate field located in the UK waters of the North Sea.