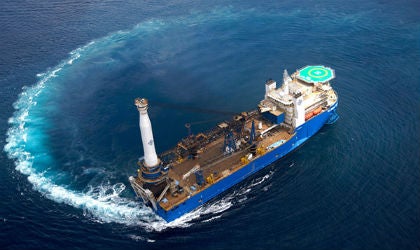 The $10bn Moho Nord subsea project is located around 75km off the coast of Pointe Noire in the Republic of Congo. It is the first deepwater offshore project in Congo at water depths ranging between 650m and 1,100m.

Moho Nord is the latest project developed in the Moho-Bilondo licence, 53.5% of which is owned by its operator Total E&P Congo, a subsidiary of Total. Chevron and the Congolese state-owned oil company SNPC respectively hold a 31.5% and 15% interest in the licence area.

The Moho-Bilondo oil field came on stream in April 2008 with the completion of the Moho Bilondo Phase 1E project in the southern part of the licence.

The Moho-Bilondo Phase 1bis development includes the tie-in of 11 subsea wells in the Miocene reservoirs in the southern part of Moho-Bilondo permit to the existing floating production unit (FPU) of Moho-Bilondo.

Tied with 14 subsea wells (nine producers and five water injectors), the Moho-Bilondo FPU can process 90,000 barrels of crude oil and 75,000 barrels of water a day. The oil output is exported to the Djeno terminal located onshore.

The processing capacity of the existing FPU is increased by 40,000 barrels of oil equivalent a day (boed) as part of the Moho-Bilondo Phase 1b.

The second phase of the Moho Nord project, the Moho Nord subsea development consists of 17 subsea wells in the Miocene reservoirs in the northern part of Moho-Bilondo licence tied into a new FPU.

“The new Moho Nord FPU has a capacity to process 100,000 barrels of oil equivalent a day.”

A new tension leg platform (TLP) was also built as part of the project to develop 17 additional subsea wells targeting the Albian reservoirs in the northern part of permit.

The new Moho Nord FPU has a capacity to process 100,000boed. The output from Moho Nord production is exported to the onshore Djeno Terminal via a new pipeline. The Moho Nord project also involves a tie-in to the existing shallow-water N’Kossa platform for gas exchange.

The first oil production from Moho-Bilondo Phase 1bis was achieved in December 2015 and Moho Nord came on stream in March 2017.

The Moho Nord Marine-1 well, which was drilled to a depth of 2,465m, discovered 140m column of oil in the upper Miocene reservoir. The 2,340m-deep Moho Nord Marine-2 discovery well, drilled 1.5km away from the first well, encountered two interconnected Upper Miocene oil reservoirs with 78m and 22m columns of oil.

The Moho Nord Marine-3 discovery well drilled in November 2008, 1.7km north-west of Moho Nord Marine-2, to a total depth of 2,300m. The third well proved a 60m column of oil containing sands in the Upper Miocene with 3,000 barrels of oil flowing a day through a choke.

In May 2009, the Moho Nord Marine-4 well drilled up to a depth of 4,239m around 4.4km north-west of Moho Nord Marine-3, and confirmed the presence of significant Albian oil resources towards the north of Moho-Bilondo permit. It encountered a 163m column of good-quality oil flowing at 8,100 barrels a day through a choke.

Ivar Aasen Field (formerly Draupne Field), is located in the northern part of the North Sea, west of the Johan Sverdrup Field.

Technip is responsible for the project management, engineering, supply, fabrication and installation of the pipelines, umbilicals and other subsea structures of the project. It also installs the manifolds, control system components and multiphase jumpers supplied by the client.

Hyundai Heavy Industries (HHI) is responsible for the engineering, procurement, supply, construction and commissioning of the FPU and the tension leg platform under a $2bn contract awarded in March 2013. In the same year, 2H Offshore was selected for the delivery management of the TLP top-tensioned riser (TTR) systems to the project.

The skidding system for the TLP is supplied by Bardex. The TLP tendon system is supplied by Hutchinson Offshore, while GMC supplies 100 high-strength mechanical connectors for the same.

FES International was contracted to supply four high-pressure fluid swivels for the workover riser system at the field. UTEC won a contract to provide full survey services on the project.

Subsea Riser Products (SRP) is responsible for the supply of a drilling riser and tooling for the drilling from the TLP as part of a contract awarded in January 2014. ShawCor won a contract worth more than $40m in February 2014 to provide pipeline coatings for the project.

In April 2015, Fugro was awarded a five-year contract worth $100m to provide remotely operated vehicle (ROV) services and remote subsea tooling for the project. In August, Aquatic Engineering and Construction won a contract to provide reel drive systems, and a team of supervisors and technicians.

Norwegian subsea company Ocean Installer was contracted in September 2015 to install umbilicals, flowlines and risers (UFR) at the field.