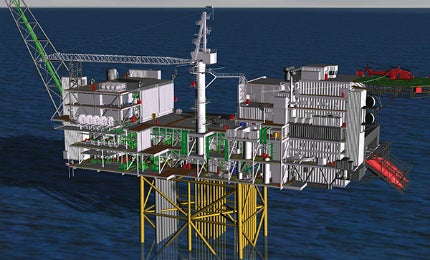 Ivar Aasen Field (formerly Draupne Field) is located in the northern part of the North Sea, west of the Johan Sverdrup Field. The development of the field comprises three discoveries, namely Ivar Aasen, West Cable and Hanz. The first two fields are to be developed under phase one, and Hanz field will be part of phase two. The oil fields are located 175km away from Karmoy.

Ivar Aasen is located in production licence PL001B, Hanz in PL028B and West Cable in PL242, all within Blocks 16/1 and 25/10 in the North Sea at water depths of 112m. The three fields are estimated to hold reserves of 150 million barrels of oil equivalent (boe).

The development of the field is expected to cost Nkr24.7bn ($4.3bn). Det Norske is the operator of the field, while Statoil and Bayerngas Norge hold 50% and 15% shares respectively in the three licences.

Production of oil from phase one began in December 2016, while phase two will start delivering in 2019. Initial production from phase one is estimated at 16,000boe a day, which will increase to 23,000boe a day when both phases come online. The expected lifetime of the field is 20 years from the time of its commissioning.

"The three fields are estimated to hold reserves of about 150 million barrels of oil equivalent (boe)."

The plan for development and operation (PDO) of Ivar Aasen was submitted in December 2012. The contract for the front-end engineering and design (FEED) study for the development of the offshore oil field was earlier granted in March 2012.

The two oil fields under phase one are developed through a manned platform. Subsea installation of phase two will be connected to the PDQ platform of phase one through a flow-line and umbilical system. Offshore facilities are supervised from a control room which was constructed onshore.

The field is being jointly developed with Lundin Norway’s Edvard Grieg Field (formerly Luno Oilfield), which produced first oil in November 2015. Oil and gas from Ivar Aasen is channelled to the Edvard Grieg platform for further processing and export.

The PDQ platform for the oil field was laid at water depths of 112m and comprises 20 well slots, out of which 13 are to be used.

"The plan for development and operation (PDO) of Ivar Aasen was submitted in December 2012."

The wells are drilled using a leased jack-up. The platform is approximately 230m-high. The steel jacket of the platform measures 138m-high and weigh 14,400t. The topside of the platform weighs 13,700t, and features single cabins for 70 people and a helideck.

The platform is also equipped with gas compression, separation, water injection, flare boom and metering facilities. The platform is electrified right from the start of the production process.

Wood Group Mustang provided the engineering and design for the topsides of the PDQ platform. Construction of the facility was handled by Sembcorp Marine’s subsidiary SMOE.

The Skrugard Field Development project comprises of two oil fields, namely Skrugard and Havis, located in production license PL 532, about 100km north of the Snøhvit-field in the Barents Sea.

The Brage field lies in the northern part of the North Sea at a depth of 140m. The field is situated in blocks 31/4, 31/7 and 30/6 and primarily contains oil, along with minor quantities of gas.