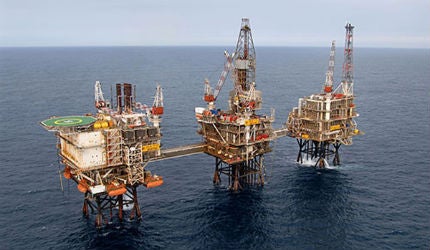 Offshore oil field Oselvar is located at about 250km from Stavanger in the south of the Norwegian section of the North Sea, and was discovered by Elf in 1991. First production from the field took place in April 2012. It is expected to produce for about 20 years.

The Oslevar field is operated by DONG E&P Norge, which has a 55% stake in the project. Other stakeholders are Bayerngas Produksjon Norge (30%) and Norwegian Energy Company (Noreco – 15%). Estimated cost of the field development was NOK4.7bn ($783m).

Reserves and production at the Oselvar field

The total estimated reserves at Oselvar field are 38 million barrels of oil and 141 billion cubic feet of gas. The oil and gas reservoir lies at depths of 2,900m to 3,250m. The reservoir is in Paleocene sediment sandstones, also called Forties Formation.

Development of the Norwegian oil field

"Plans for development of the field were approved by the Norwegian government in 2009."

Drilling of the exploration well began in 2006, using the Maersk Guardian jackup. The first appraisal well (1/3-10) was drilled to a depth of 3,288m and confirmed the fluid characterisation and size of the reservoir. It was followed by drilling of another two wells (1/3-10 and 1/3-10A) which determined the commercial viability of the field.

The Oselvar field consists of two horizontal production wells, namely 1/3-A-1H and 1/3-A-2H. The third well 1/3-A-3H is currently being drilled and is scheduled for completion in 2012.

Subsea pipeline from Oselvar to Ula

Ula and Oselvar are connected by a 23km subsea pipeline. A new gas handling module was installed at Ula to receive oil from Oselvar production.

The subsea template transports the Oselvar oil to the Ula field platform for processing. The processed gas is transported to the Ekofisk field. It is then exported to Teesside in the UK through the Norpipe system for further distribution.

Gas from the Oselvar field is re-injected into the Ula reservoir as part of the water alternating gas (WAG) injection scheme. It is expected to enhance the production and field life of the Ula field. Ula also processes production from Tambar and Blane fields.

The subsea systems are designed to have minimal impact on the trawler fishing industry in the area.

The company had also received a contract from BP in December 2009 towards development of a tie-back module at the Ula platform for Oselvar. The NOK450m contract included development of the module, associated components and assistance for offshore installation and commissioning. Aker Solutions also conducted front end engineering design (FEED) study for the tie-back module.

In September 2009, Technip Norge was awarded the engineering, procurement, construction and installation contract for the Oselvar field development. The scope of works included delivery of about 27km long pipe-in-pipe flowline, installation of subsea equipment and tie-ins and umbilical. The value of the lump sum contract was about NOK333m ($55.3m).