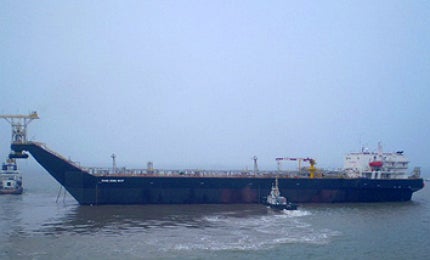 Rang Dong oil field is located 135km south-east of Vung Tau in block 15-2 of the Cuu Long Basin in Vietnam. The block covers 400,000 acres and is proximate to the Bach and Ruby fields.

Japan Vietnam Petroleum Corporation (JVPC), a subsidiary of JX Nippon Oil & Gas Exploration, operates the field with a majority stake of 46.5%. The remaining stake is held by Perenco (36%) and PetroVietnam (17.5%). Perenco purchased ConocoPhillips’ stake in Rang Dong in the first quarter of 2012.

Rang Dong has been in production for more than 13 years. In February 2011, JVPC and co-owners of the field announced they would conduct a pilot test for enhanced oil recovery (EOR) from the field. It was claimed to be the first offshore EOR in south-east Asia.

The test was concluded positively in February 2012, indicating significant potential to ramp up production and reduce carbon dioxide emissions. It involved injecting CO2 into the reservoir well to improve production.

Infrastructure of the Vietnamese oil field

Rang Dong has three platforms, namely NI, S1 and E1. Oil produced from the field is stored in MV-17, a floating storage and offloading vessel, then offloaded to tankers for exportation.

MV-17 was installed at the field and given the go ahead for first oil certificate in November 2008. The FSO is owned by MODEC and leased to field operator Japan Vietnam Petroleum Corporation (JVPC).

Having acquired interest in block 15-2 in October 1992, JVPC discovered the Rang Dong field in June 1994. Production commenced in August 1998 after the construction of the first platform. Two more platforms, added in 2003, increased the production from 50,000bpd to 68,000bpd.

Initially the associated gas produced from crude oil production was flared at the offshore platform. To reduce the release of gas emissions into air, an associated gas recovery and utilisation project was undertaken in 2003.

As part of this project, the associated gas is recovered and supplied to local power generation companies through the gas pipeline linked to Bach Ho’s gas pipeline.

In an attempt to further improve the use of clean technologies the operator stopped burning the associated gases, such as methane, ethane and propane at the project site. Instead, the gases are being recovered and supplied to gas-based power plants in Vietnam through an undersea pipeline. The initiative has helped cut approximately 800,000tpa of carbon dioxide emissions at the site. It was also approved officially by the CDM Executive Board as a CDM project.

Contractors and future for the Rang Dong oil field

The engineering, procurement, construction and installation (EPCI) contract of MV-17 was awarded to MODEC in July 2006.

The contract also called for commissioning, operation and maintenance of the FSO for nine years, with an option of one year extension for a further five years.

MODEC was also responsible for the supply of an external turret mooring system. The system was designed and constructed by Sofec for MODEC.

Pacific Energy was involved in the engineering and geo-technical services of the offshore field and QIS was responsible for the testing of pressure vessels and piping systems of the platforms. PFP provided the CS pipes, fittings, valves and flanges for the platform. The gas pipelines were laid by Global Industries.

PetroVietnam has requested that the Vietnam Government allows the operators of Rang Dong to work on the east and south-east of the field for an additional two years.

Lan Do is an offshore gas field in Block 06.1 of the Nam Con Son Basin, about 365km offshore of the southern coast of Vietnam.

FEMI-CZ is a leading Italian producer of metallic cable tray...

Patola oil field is located at a water depth of approximately 280m, adjacent to the producing Bauna and Piracaba fields,…

The Belbazem offshore block, located approximately 120km north-west of Abu Dhabi in the UAE, is being developed by Al Yasat…

Haltenbanken East is a proposed multi-field development project located in the Norwegian Sea, offshore Norway. The project covers the collective…