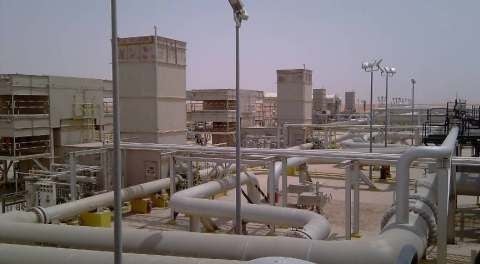 Aramco operates two crude oil pipelines of 48in and 56in running from the Eastern province fields to the Yanbu offloading facilities on the Red Sea. The pipeline was built in 1981 and the capacity was increased to 5 million barrels a day in 1992. One of the pipelines can also be used to transport natural gas, which is used to fuel most of the gas turbines. Some are fueled from the 26in to 30in NGL pipeline running in parallel.

The pipeline consists of 11 pumping stations and two breaking stations. Each of the 11 pumping stations operate two Rolls-Royce RB211 and three Pratt & Whittney FT4 pumping units. Four of the remote stations that are not connected to the national electric grid operate four Allison KB5 and six Solar Saturn units for local power generation.

In 2010, Aramco awarded a contract to Siemens SA for the retrofit of the control systems for the above mentioned turbines, 65 in total. Siemens subcontracted Holland-Controls for some of the software engineering, factory acceptance tests in Germany and the commissioning of the prototype installations. The project lasted three years and the last turbines were handed back over into operation in September 2013.