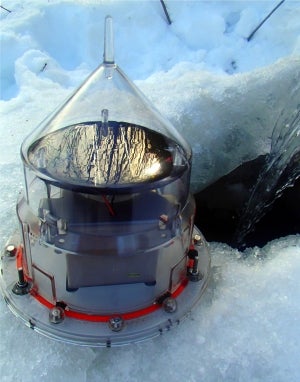 CR constantly gathers field data about the performance of its marine signal lanterns.

At the beginning of February, which proceeded to become the coldest month on record in Vermont and New Hampshire with temperatures reaching -37°F (-38°C), the company submerged one of its CR2100 marine signal lights in a pool under a waterfall. The waterfall formed a 3ft-tall ice umbrella over the light.

A total of 32 days later, the light could still be seen blinking under the snow and ice without any solar charge. It was retrieved with an ice pick, also used by the employee for the sport of ice climbing, and inspected. As stated, the light was fully operational, was completely dry inside, and showed no indication of damage.

The CR2100 marine signal light is a member of CR’s latest Series 2000 family of lights which consists of five models, both self-contained (solar-powered with battery), externally powered, and internal battery with external solar panel.

CR Control Systems of Lebanon, New Hampshire, US, is pleased to announce that SS Tech...

The US Coast Guard (USCG) has awarded a one-year contract with four option years to...

CR Control Systems has been designing and manufacturing marine aids to navigation lighting equipment for...